A deftly woven book-length poem that questions the existence of universal individual rights such as speech and citizenship, especially in relation to borders, both national and linguistic.

Comfortable neither with the self made entirely through autonomy or genealogy, SPEECH tracks ideas of freedom as a woman walks, threading her way through a cityscape. Place and home are recursively made in this deftly woven book-length poem overlaying west and east, here and there, past and present, citizen and other.

SPEECH is reflection, part-history, mined with precision and care. It is research/commentary: about
hope, dread, life! SPEECH is language, what cities and paperwork have turned people into, what simmers
beneath. Ultimately, SPEECH is Magi: sleuth, seeker, writer, walker.

Jill Magi’s timely and politically engaged poem, SPEECH, ruptures social dependence on coherent
structures of understanding and organization toward more ethical figurations. In language that is
unsparing, relentless, and precise, Magi carves an experimental trajectory, touching along the way: the
violence of classism, racism, sexism, xenophobia; the brutality of environmental exploitation; the
excruciating trap of poverty; the intolerable sorrow of exile and migration; the fraught question of
citizenship. Magi slides seamlessly between temporalities and geographies; this collection could refer as
much to a stratified United Arab Emirates as to a divided United States. It is in the smudged borders, in
the third spaces, as Magi discloses, that potential freedom, agency, community, and overlooked beauty
reside. SPEECH takes us there, and we are relieved to discover that such a space may indeed exist, if
only, for the moment, in words floating down like feathers, with the promise of a future materialization.

The “impossible citizen” of Jill Magi’s latest book circulates through border checkpoints, through nation-
states, through invisibility and “speech removal,” ultimately becoming a figure that carries and is carried
by global continuums of neoliberal violences: continuums of violence that allow us to see how all the
countries are terrible in ways that both erase and amplify specificity. How language generates meaning
and meaninglessness is at the heart of Magi’s stateless poetics, which radically interrogates discourses of
public and private, of race pitted against class, of how we live with the erosion of social services and the
public sector, among other ideas. Magi’s SPEECH asserts that poetry ought to ask the question of how
we survive amid the brutalities of nationalism and its rhetorics, of how we survive in a world that is
always on fire.

In SPEECH, both kinds are deconstructed, speeches throughout history are woven in and reflected upon, speech as a given, as a “right,” is pushed against as an assumption, speech of the powerful versus those marked invisible, speech of different kinds: written, verbal, animal and sonic gestures are all carefully considered in this wide torrent of investigatory lyric.

The poems reach through conflict, crises and trauma for solutions but hold no solutions but the obvious, that we should be better to each other, and for each other. Why aren’t more readers listening?

Abu Dhabi-based poet and artist Jill Magi furnishes SPEECH, her new book-length poem published earlier this month, with layered textures of language, subject, and object, calling at the delineations of border and sending her subject through them. That subject, however, “won’t be indexed precisely,” Magi asserts in the books appendix, “Painting a bibliography.”  She asserts further that SPEECH is as much an archive, of painting– of movement– of place, as it is a poetic engagement.

Magi deftly explains how race, class, sex and sexuality are ranked in our world’s radical system, at once tough and fragile. Her words invite us to reach up to the glass ceiling, knock on it, and consider carefully what doors open for us.

SPEECH is a record of searching, of crisscrossing, going around in circles, all the vectors, tangents, and arcs of one seeking belongingness without belonging.

It is unsurprising to learn that Magi is also a weaver, knitter, and sewer. You feel this quality in the way her impossible citizen walks—or, better yet, weaves—through the city, pulling its various histories and injuries into this text. A true cosmopolitan may, perhaps, be a loom. Maybe Magi’s impossible citizen isn’t not possible, but rather, her ways are unrecognized. Her manner is to create.

I now know that Abu Dhabi never needed me to decipher its shapes as if there is one way to read or one way to re-write its codes. A new texture—and a new book—has come from shirking the idea that there is a necessary text that I must write. Weaving and walking in Abu Dhabi has shown me to keep returning to the street and to the desk: ground and sky, living and walking, sure only of the motion that moves bodies and language back and forth along paths that intersect and diverge.

Reading Jill Magi’s newest poetry collection SPEECH is like going for a walk inside someone else’s dream… SPEECH is not just a cognitive mapping of a Middle Eastern city, but the unveiling of how one ingests a physical space and attempts to produce a poetic response—a simple act of speech. 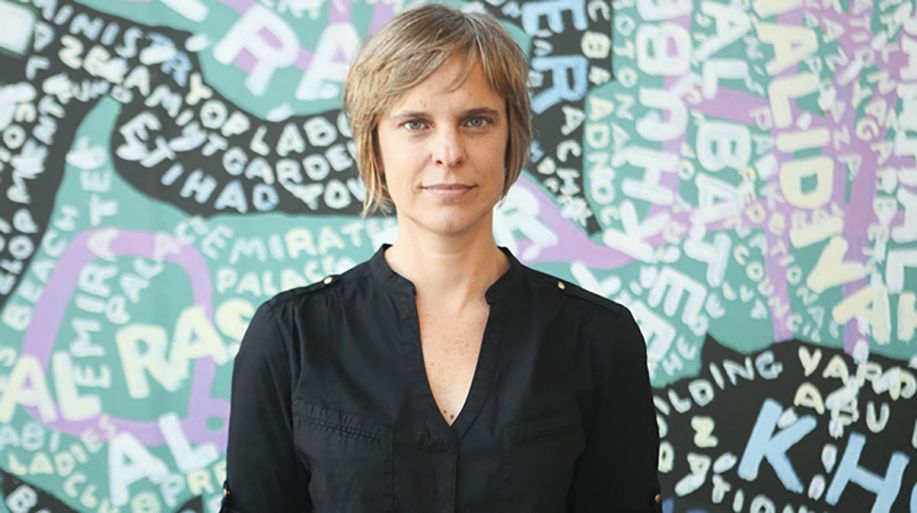