Selected by Simone White as Winner of the NOS Prize

In order to live through the grief of the Ghost Ship Fire and the Muslim Ban, Villainy foments political action in public spaces, and indexes the various emotional states, such as rage, revelry, fear, grief, and desire to which queers must tend during protest. In scenes loaded with glitter, broken glass, and cum, Abi-Karam insists that in order to shatter the rising influence of new fascism we must embrace the collective work of antifascists, street medics, and queer exhibitionists and that the safety that we risk is reckless and necessary. Disruptive and demanding, these punk poems embody direct action and invite the audience into the desire-filled slippage between public sex and demonstration. At heart, Villainy aims to destroy all levels of hierarchy to establish a participatory, temporary autonomous zone in which the targeted other can thrive.

Click here to read an interview with Andrea Abi-Karam on the Nightboat blog!

“In an industry that encourages the toothless, Andrea Abi-Karam’s propulsive Villainy calls: ‘give the poem teeth.’ In an industry that incants, this book incites, revealing the revolutionary potential of desire, of determined disfiguration, of poetry itself, which, in Abi-Karam’s hands and ways becomes, as the street, a site of unbounded action. Here is a poetry that demolishes poetry. A fire to our fascist order. A book fully alive.”

“Andrea I like your experience. Thanks thanks thanks for this frank obtuse poetix, this wriggling book. Its wisdom is when I think I’ve summed it up it’s something else – action and spatial, flat versatile wily & interior maybe even yeah poetic in that way only prose can be but CAPS-STRONG, manifesting today. Oh and here’s my favorite line: resist the present approach impurity. Yessss!”

“If we are to start again, ‘renewed or better,’ Villainy insists, we’ll first suffer the pain of radical un-making. Willingness to suffer such pains, in, for example, the desire to be ‘flat’ (which would hurt) constitutes villainy while the world belongs to ‘1. CAPITALISM 2. THE STATE 3. COLONIALISM 4. NAZIS 5. RACISM 6. OPPRESSION.’ This is a text that performs the awful compression – squeezing – of our capacities collectively to deal with reckless disrespect for life not just under this government. This book is fire. But not to burn-it-down. To light my way to a friend.”

“In these incisive poems, Andrea Abi-Karam engages with both language and the body as sites of becoming and unbecoming, as gateways through which to summon infinite possibilities. VILLAINY asks how language can be an ‘accomplice to radical action,’ and then—in this work sharp as glass shattering, hallowed as a body shaped into a home for one’s dead—answers.”

Villainy incites the reader to action while dignifying queer grief and rage by conceding no easy answers, reminding us that the word “art” once referred to something practiced with the hands.

Infused throughout Villainy is a frenetic playfulness, a “TRANSFUSION OF GLAM,” and a celebration of all things punk, sexy, dirty, risky, villainous. Abi-Karam’s use of all capitals tattoos onto their poems a set of teeth, which, coupled with the baseline-beating anaphora, gives this collection a heady directness and evokes the energy and rhythm of a street protest.

Abi-Karam’s Villainy is a dizzyingly captivating work of anarchist poetics, seamlessly weaving the blunt language of the Anarchist Manifesto with a deeply vulnerable and inviting syntax. While this book places American imperial violence in its crosshairs, it is first and foremost a document of grief, both personal and collective.

Abi-Karam writes with a revolutionary energy that invites the reader to rethink how a poem sounds, and what it can do on the page and beyond.

At the heart of Abi-Karam’s Villainy is an impulse to keep us alive to the world and to language in a way that is necessary to activism.

I hope this book finds its way into the hands of those queer lives who need healing, whose hearts need the warm of Andrea’s spitfire text. These poems wrestle with the world, its violence and fleeting joy, and invites us to confront these truths, comforts, and peace, in ourselves.

While many aspire towards a “toothless” antiseptic poetry, Abi-Karam proudly displays their titanium fangs, delighted to bear the smoldering crown of the insurrectionist. They loom leather-clad at the edge of a churning vat of nuclear waste, detonation device firmly in hand. “I am the villain,” they declare with a radioactive glint in their eye, before plunging headfirst into the abyss. It might behoove you to join them.

Many of the poems in VILLAINY are set in the radical queer spaces that Abi-Karam inhabits; they lean into the eroticism and overwhelm, producing a viscerality that only poems can. Simultaneously, the book asks, but what else can the poem do? Allowing an honest questioning of the role of the poet alongside movement spaces while negating the easy conventions of a poetry collection, Abi-Karam’s work feels right at home alongside other titan works of anti-imperial poetics.

In Villainy, it’s Abi-Karam’s resolve that we hear, full and flagrant above all… In this dream, all of us do, and somehow — swept up in the motion, teeth bared in joy or in rage — we find a way through.

Though grief is ever-present in Abi-Karam’s world—which is also our world, dedicated to violent control over queer spaces and bodies—present, too, is the possibility of community, connection, ecstasy.

“In this anarchist poetic manifesto, the theme of survival in the face of surveillance coexists with queer desire and joy in public places. Queer sex in public—like a dance floor, a museum room, etc.—in particular, becomes a way to articulate rebellion in the face of state surveillance. Abi-Karam’s work is specifically interested in the healing and empowering nature of collective work and co-existence, whether that’s in their personal politics or creation of art.”

Click here to read an interview between Andrea Abi-Karam and Sanchari Sur in Electric Lit!

-Sanchari Sur, Electric Lit
Villainy calls upon many voices as it confronts what poetry can’t, on its own, bring into being in revolutionary struggle… Villainy loosens away from villain-as-identity and moves towards forces, energy transfers, and what collectivity engages and reworks in struggle. Refusing optic reduction, staying tactically capacious, in pursuit of another world.
-Vani Natarajan, The Poetry Project Newsletter

Language is a way of forming the world we want to see in anticipation of its arrival. So too, Villainy shows us, are grief and friendship.

Villainy is a timely collection and it should be an enduring one, something we keep reading and talking about. The future is dire and the time for action is now.

By following the threads of statement and metaphor that weave in and out through Andrea Abi-Karam’s pages, we can appreciate how cohesive the writer’s vision is, and how appropriate the choice of disruption for their poetic project.

Reading this collection, one senses the need to risk becoming indistinguishable because of the fraying that happens at the body’s limits. The oppressive forces that push bodies to these limits are a kind of death, so, in pushing back on those forces one is pushing back on death as well.

Villainy is openly and honestly passionate and heartbreaking, deeply personal and savagely political, attempting to articulate shape and purpose out of an enormous grief and loss, as Abi-Karam is somehow able to articulate an incredibly powerful response to what might, at first, appear a rage and a grief too large to be possible to write through or around at all, let alone so well.

This is poetry that is anti-poetry that is very wise and confrontational. To make a new way we must “unmake” an older way and suffering comes with this. Andrea Abi-Karam uses language and the body as ways of becoming and unbecoming that lead us to new futures and possibilities. Here is the language for a new world and a new activism.

Villainy should be read like a trans chain punk abolitionist manifesto for the world we are inhabiting right now – distorted, fragmented, and liminal, barreling out of extreme tragedy without a destination but with deep commitments to justice and nothing to lose.

“With a fiercely anti-singular and polyvocal construction, Villainy imagines a militant collectivity in public space—beyond and while breaking institutional walls of museum, prison, and border.”

Click here to read two poems from Villainy in BOMB!

Click here to read ‘An Unbecoming’ from Villainy in The Brooklyn Rail!

In a preface to “After Cecilia Vicuña,” a poem from the collection Villainy, published in September by Nightboat Books, Andrea Abi-Karam includes a note on the Chilean poet and visual artist Cecilia Vicuña, who condemned General Augusto Pinochet and spoke out about how “the lies (the words, the language) of the Chilean dictatorship murdered & tortured thousands of people.” In the poem, Abi-Karam asks questions about the power of words and how to provoke change through a medium such as poetry that at times can feel devoid of consequence. “i ask questions like / … how to weaponize the poem words as weapons / give the poem teeth.” What questions would you ask yourself about the power of your own words? Write a poem that contemplates the impact you wish to make as a writer—the reasons, hesitations, desires, and conflicts that arise when you create.

I just finished reading Villainy—which is thunderous and magnificent—and was struck by what happens to bodies, the images and language that come forth—scraping, stapling, patching, tacking, taping, splintering, wiring, cutting, piecing, fissuring. 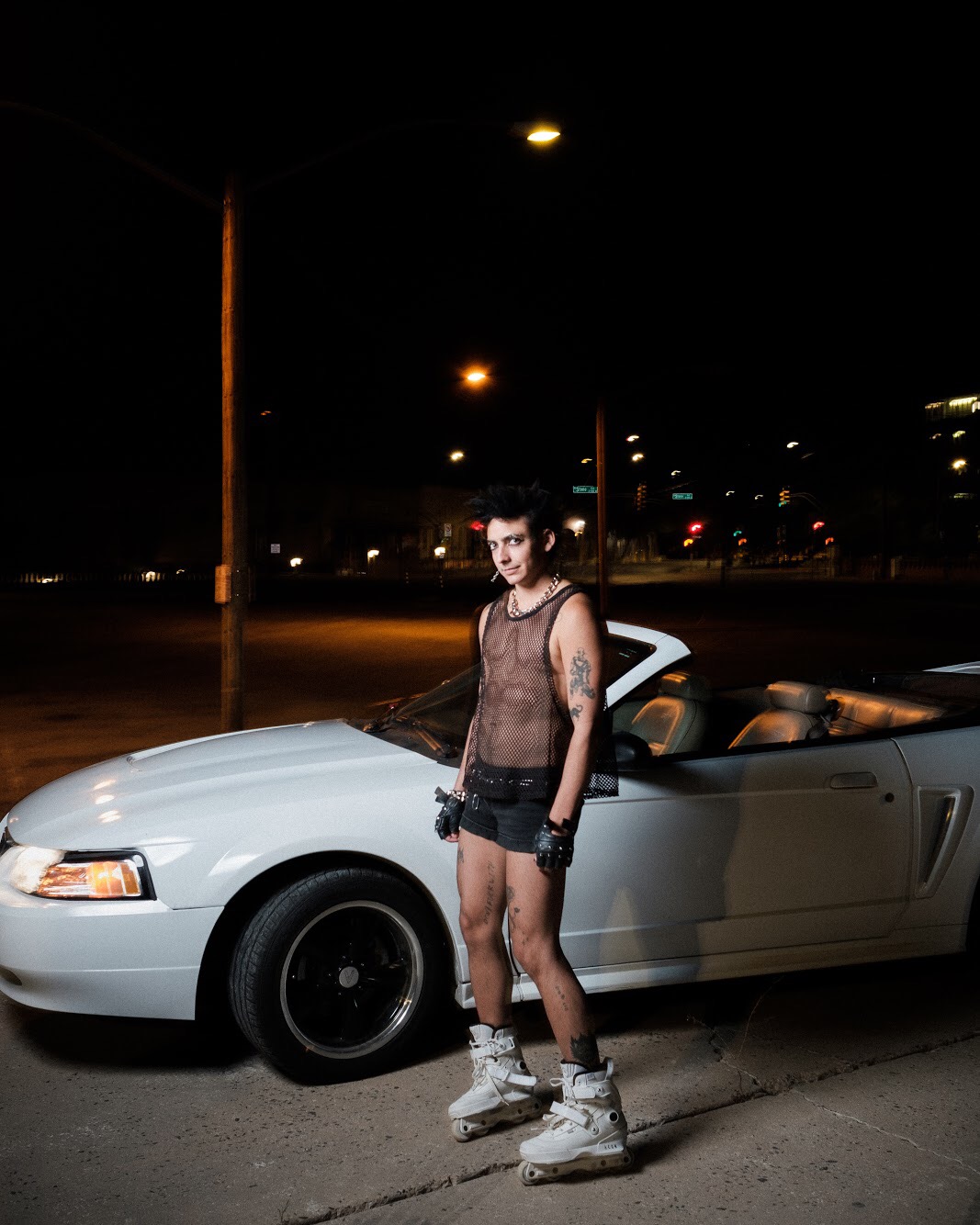