A lyric cover of Kathy Acker’s career and a study of the development of narrative in her books deftly tracing Acker’s interactions with a diverse palette of avant-gardisms, world letters, cultures, and theory. Martin follows Acker through New York’s downtown St. Mark’s Poetry Project scene, Black Mountain College, and the Beats, as Acker embarks on her own deconstructions of subjects autobiographical and historical, art procedurals, proto-conceptual writing, legacies, and spirits.

“Douglas A. Martin’s Acker is exactly the kind of literary criticism I want to read right now: an open-ended yet utterly thorough record of one deft, curious, intrepid mind beholding another. Personal when he needs to be and clinical when his investigation calls for it, Martin acts as the perfect counterpoint to Acker’s all caps bombast.”

“This is a book worthy of its subject: singular, unpredictable, a mongrel that occupies that rare, evocative space between genres. Expressing truths that transcend the stolid facts of conventional biography and literary analysis, Douglas A Martin reveals how the act of writing is also, always, an act of self-authorship, of identity destruction and creation—and how Acker took this process to an extreme that still stuns, confounds, and inspires.”

Two new books, by Chris Kraus and Douglas A. Martin, explore Acker’s life, work, and legacy. Kraus’ After Kathy Acker (Semiotext(e), September 2017) could be characterized as a formal biography – though it’s much more complicated than that — while Martin’s Acker (Nightboat Books, October 2017) is a series of fragmented mini-essays and ruminations about Acker’s work. In reading these two books, one can only wonder: How far and impactful was Acker’s reach? What kinds of reactions did her writing elicit? And who, if anyone, can be considered an appropriate spokesperson to bring forth the ideas of language so deeply rooted in every word Acker expresses? Martin quotes Charles Olson: “to write about something is academic, and to do it in your writing is visceral.” Kraus and Martin perfectly represent this dualism. While they are both bound to the rules of their chosen genre (which ironically, their subject systematically defies and rejects) each author has a very different relationship to the subject. Martin, who did not know Acker personally, is writing at an academic remove; conversely Kraus and Acker were part of the same community of artists and writers.

Acker by Douglas A. Martin, is a rumination on Acker’s methods, an incantation to her relentless experimentation, and a meditation on the process of honoring the impact of a personal hero.

Whether the reader is an Acker novice or an aficionado, seeing that insistently transgressive artist through Martin’s eyes offers new insights into her brilliance and bombast. Punk and profane in her writing and her life, Acker was voracious and shape-shifting, rebellious and disruptive, and fiercely adamant (with her tattoos, piercings and signature crew cut) about the awkward and tender toughness of being embodied. She wanted, Martin writes, “to dispense with bindings, their conventions, of gender, of genre, to overflow them, to make her own way more unlawfully embedded with others, their lives, their words, and by extension, make her own more awe-filled.” Resisting hagiography by way of compassionate yet unsparing scrutiny and quotation, he honors and expands on that legacy, revealing Acker not in any single light but fittingly refracted.

Interview with The Creative Independent 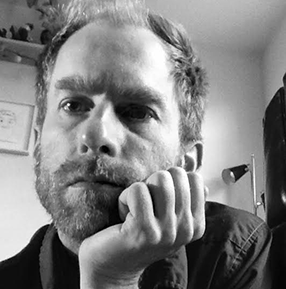 Douglas A. Martin is the author of books of poetry and prose, including: Once You Go Back, Your Body Figured, In The Time of Assignments, Branwell, and They Change the …

More about Douglas A. Martin