Paraguayan Sea, a sublime love tale of border and gender travestias, moves in a language that defies immigration regulations

Originally written in Portunhol—a Spanish-Portuguese mix from where Brazil and Argentina border Paraguay—with Guaraní, Bueno’s Paraguayan Sea is a homage to life, to being embodied, to border crossing, and to language itself. Who is its Paraguayan narrator who has loved two men, old and young, in a hot/cold beach town in Brazil? A woman, as she says? A gay man switching pronouns? Paraguayan Sea is a river-to-the-sea of identities and migrations, its Portunhol translated into Frenglish by the polylingual poet Erín Moure.

Reader, open this book and you’ll be ensorcelled by a signal linguistic music, through which the sounds of national, intra- and cross-national languages scurry pell-mell alongside and through each other, oh world with its borders thrown open, giving rise to one of literature’s unforgettable poetic seductions. The curious noises that issue (silently or not) from your reading lips, the novel muscular contractions of your throat and mouth, will startle your being into thrilled wakefulness. The poet-translator born to invent Wilson Bueno’s work in a version satisfying enough to infect English with living, visionary generosity and such intimate foreignness is certainly Erín Moure.

Wilson Bueno’s Paraguayan Sea is a heady, hot-tongued ballad of desire and decrepitude. It made my eyes go wide and my mouth gasp in delight. The feverish ramblings of Bueno’s “marafona floozy” recall the dark deliriums of Hilda Hilst and João Gilberto Noll, and the mixed-blood trickster humor of Mário de Andrade. Erín Moure’s daring translation transmutes Bueno’s South American borderlands mix of Portunhol and Guaraní into a winking waving gyrating QuébecFrenglish that maintains the singsong incantations of the original Guaraní. Her translation of Bueno’s elucidictionary of the Guaraní langue is not only a resource for grasping the book’s indigenous elements but also a virtuoso lexical poem in itself. My mind is exploding with the new possibilities for translation that Moure has opened up. This is a dazzling, important work!

What Paraguayan Sea utters may be a pre-death eulogy or a tentacular lament, the hiss of a tarantula poised to strike or a multilingued moan of mourning, in which our narrator, the marafona, aka Ariadne the floozy, is crocheting the web of her life, i.e. language, the wet sexe of désir, the messy, exuberant, tormenting, astonishing fait of being sentient flesh, even when life is añaretã, i.e. hell, while keeping vigil for the satyr of her existence, aka the oldguy (who may or may not be dying, whom she might or might not have killed), as Bueno’s plurilingued prose hemorrhages into Moure’s poetic echolocation, so that when, panting, à bout de souffle, you reach the end of this virtuoso tour de langue, you want to start reading it all over again.

“Over the past decade or so, Erín Moure has become just as well-known for her translation work as for her own writing. She has published sixteen books of poetry, a book of essays, and has translated fifteen volumes of poetry from French, Spanish, Galician, and Portuguese by poets such as Nicole Brossard (with Robert Majzels), Andrés Ajens, Louise Dupré, Rosalía de Castro, Chus Pato, Fernando Pessoa, as well as a chapbook of poems from Ukrainian by Yuri Izdryk (with Roman Ivashkiv). Her work in Canada has received the Governor General’s Award, Pat Lowther Memorial Award, A.M. Klein Prize twice, and has been a three-time finalist for the Griffin Prize. Her latest translations are from the French of François Turcot, My Dinosaur (BookThug, 2016); and from the Galician of Chus Pato, Flesh of Leviathan (Omnidawn, 2016); Rosalía de Castro, New Leaves (Small Stations, 2016); and Antón Lopo; Distance of the Wolf: A Biography of Uxío Novoneyra (Fondación Uxío Novoneyra, 2017). A major retrospective of her poetry, Planetary Noise: Selected Poetry of Erín Moure, edited by Shannon Maguire, appeared in 2017 from Wesleyan University Press. This fall, her translation of Wilson Bueno’s Paraguayan Sea will appear from Nightboat Books, and New Star Books will publish her memorial to a little man, Sitting Shiva on Minto Avenue, by Toots.”

“These are all initial considerations that animate a first reading of Paraguayan Sea (Nightboat Books, 2017), a serpentine prose poem by the late Brazilian poet Wilson Bueno, now rendered in a unique and highly orbicular translation in English by Erin Moure. Originally written in 1992, Paraguayan Sea is a luminal poetic verbiage divisible beyond one language and one idiomatic register. But Paraguayan Sea is not a poem about the equivalences between languages or even about the images that converge, merely touching, while staying afloat in the luminous currents of the Paraná River. Paraguayan stages a zone of indistinction between the rhetorical exchange between poetry and prose, producing an exodus from all national and regional literary formation of the Brazil-Southern Cone cultural regimes that unbind the provenance of three tongues (Portuguese, Spanish, and Guaraní) into a fluvial proliferation beyond the apparatuses of language.”

“Wilson Bueno first published Mar Paruaguayo in the early 1990s in Brazil, and it became a cult classic across the southern realms of the Americas, with further editions published in the 2000s in Chile, Argentina, and Mexico. Erín Moure’s new translation expands the reach of this essential book, one that resists categorization—a book-length prose-poem? a novella? a lyric murder mystery? a confession?—and which offers the reader an unprecedented and radical pleasure. From Paraná, a southern state of Brazil, Bueno originally wrote Mar Paraguayo in an invented creole of Portuguese, Spanish, and Guaraní. Paraná borders Argentina and Paraguay, and it is not uncommon for Spanish speakers in Brazil to slip into Portunhol, an informal admixture of the Latin cousin languages, Spanish and Portuguese. Moure’s translation—nay, transmogrification—into English-French-Guaraní recaptures the way Bueno fosters not only a semantic but a “rhythmic binding” of its three languages. In effect, the reader gets to participate in the creation of a new language, a language that lasts for the duration of the book.”

“Everything is fluid here, from the language choices, to the imagery, the characters themselves and the facts or non-facts or sometimes-facts of their lives. It’s a commanding book in that every line and sound and space feels intentional and thoughtfully composed, with an imperceptible formula but an experienced musicality.”

The first task of the reader is to select a reading strategy: to surrender to the humbling experience of an unreadable text or to constantly resort to tools of decryption… Paraguayan Sea is a written confession, where the reader occupies the role of the confessor. It is a book not to be read, but inventively re-read…

Paraguayan Sea is Erín Moure’s translation of Brazilian author Wilson Bueno’s 1992 classic Mar Paraguayo. Written in Portunhol (a mix of Spanish and Portuguese) and Guaraní (an indigenous language of Paraguay and surrounding regions), and translated into Frenglish (English imbricated with French), Paraguayan Sea stages a polylingual monologue of love and tragedy set in a Brazilian beach town, delivered by a fluid and floozy narrator, exuberant and fragile. Enriching the pleasure of the text is an array of paratexts by numerous authors, from introduction to commentary to interview to glossary, offering an unparalleled reflection on the process and politics of translation.

Mar Paraguayo is a difficult but incredibly rewarding book that encourages us to pay attention to the sound and shape of languages and their fluid in-between spaces. Canadian poet Erín Moure’s extraordinary 2017 translation into “Frenglish” and Guaraní gives the work new life in the Northern hemisphere. 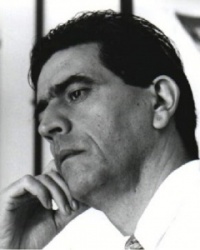 Wilson Bueno was one of Brazil’s most influential and beloved contemporary writers, editors, and journalists. His Mar Paraguayo is a sensation constantly republished in Latin America since its first …