LIFE IN A BOX IS A PRETTY LIFE

Dawn Lundy Martin’s Life in a Box is a Pretty Life investigates the ways in which language claims absolute knowledge and draws a box around lived experience. Martin writes poems that seek out moments when the box buckles, or breaks, poems that suggest there is more. Life in a Box is a Pretty Life continues Martin’s investigation into what is produced in the interstices between the body, experience, and language, and how alternative narratives can yield some other knowledge about what it means to be black (or female, or queer) in contemporary America.

When can poetic discipline help to push us beyond just being the instruments of our own subjugation? When might sustained poetic vigilance end up boxing us out from “the very thing that shimmers just beyond what’s visible to the attentive eye”? When I want to ask such questions, I pose them to Dawn Lundy Martin. This present conversation focuses on Martin’s Nightboat books Discipline and Life in a Box Is a Pretty Life. Martin’s other books include Good Stock Strange Blood (Coffee House, 2017) and A Gathering of Matter/A Matter of Gathering (University of Georgia Press, 2007). A poet, essayist, and conceptual-video artist, Martin recently was named the 2019 recipient of the prestigious Kingsley Tufts Poetry Award, and praised by the judges for providing “an uncompromising poetics of resistance and exactitude.”

“Dawn and I had the chance to “GChat,” in person, about her newest collection of poetry, Life in a Box is a Pretty Life (Nightboat Books, $15.95 [paper]), one cool, cloudy October day at her house in the Hamptons, just down the road from Jackson Pollock’s old studio. We wanted to do an interview that had a time limit, that included the immediacy of the present, rather than tinkering with responses for days. But we also wanted the freedom of typing, not having to transcribe later. We did take a break at one point to walk down to Maidstone Beach. The sun, after being hidden all day, was just barely breaking out from under the clouds at the horizon. On a rock in the jetty someone had painted “I LOVE BEATY”—the U, absent, still sounded in our voices and out across the still water of the inlet. It felt somewhat perfect, this U, whose sound the meaning of the misspelled word so depended upon, seemingly absent. I think this is what Dawn’s poetry manages to do over and over again, make visible the effects of the invisible, the ringing in our ears and across our flesh of what we can’t, or don’t always want, to see. Her poetry forces us to question what any beauty-obsessed reader might have first gone looking for.

Karen Lepri: I want to begin at the beginning, if that’s possible. Could you talk about the genesis of your project, Life in a Box Is a Pretty Life? It’s hard not to read the title as an ironic critique of incarceration. Is this a wrong entry point?

Dawn Lundy Martin: The beginning of a project can be very difficult to access. I know, though, that I never meant for the book to address the prison–industrial complex directly, though it is part of a larger critique I want to make. I am always writing something, working on something, that is a kind of before the beginning. It was like that with Life in a Box is a Pretty Life. At some point the project gains focus, like a little click, and a conceptual shape emerges around the work. The title happened somewhere in the middle of a poem. It’s ironic, yes, and attending to incarceration, but incarceration writ large. All our big and little prisons.”

“The book’s deft movement between broken lines and long ones, a perfect “poemy” moment and a hard crack on the ear (say “Trauma sack”), harbors no romanticism. Instead it insists on how aesthetics are born out of the politics of racism, capitalism, and unfreedom. One of the many marquees reads, “WHEN WE ARE INSIDE THE PRISON / WE CAN ONLY THINK OF BEAUTY.”

Dawn Lundy Martin is a legendary poet who’s work I’ve admired for years. Her poems are warm and urgent, and depict the trials and triumphs of life as a black person and a queer person. Martin is currently the director of the Center for African American Poetry and Poetics of the University of Pittsburgh, a program that builds off of the legacy of collectives like Cave Canem which seek to uplift and amplify the voices of black poets worldwide. When it comes to championing young black poets, Martin is certainly doing the work. Her poems often visit the violence that happens in domestic scenes and how the idea and space of a home can be tainted. 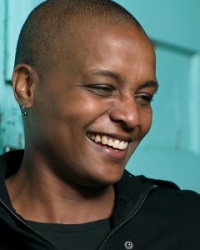 DAWN LUNDY MARTIN was awarded the Cave Canem Poetry Prize for her first poetry collection, A Gathering of Matter/A Matter of Gathering. A founding member of the Black Took …