Vincent Katz’s new collection, his first in a decade, presents an aesthetically and emotionally diverse series of poems that attempt to tune in to particular details of the poet’s life, from friends and family to larger geopolitical issues.

In staccato rhythms and with crystalline matter-of-factness, Vincent Katz surrenders once again to “the tug of street.” A 21st-century flâneur whose wanderings range from the sidewalks and subways of New York City to the crowded beaches of Rio de Janeiro, the poet brilliantly taps the “energies of long-buried poetries,” whether to summon distant childhood memories or to nail fleeting details of the lives flowing around him. Never forgetting the threats hemming the edges of everyday beauty and good fortune, the poems in Swimming Home evidence Katz’s growing concern with geopolitics and mortality. Writing explicitly in “the middle of my life,” he never lets the reader forget that “the constant losing of things is part of the dive.” These poems remind us that the perceptual world is, indeed, wondrous, if we would only lift our eyes, for a moment, from the hypnotizing screens of our smartphones.

Beautiful rhythms, surprises, driving pulse and panoramic view entwine with the inimitable thrust of walking, and looking, and noticing and thinking. There is deep pleasure in reading Vincent Katz’s Swimming Home. He’s got a fabulous eye out in the particulate roaring peopled world. I love these poems for their metabolism, immediacy, their dharmic politics and muscle. I want to swim home too and land where

Poetry can’t mean that much, everyone asleep

Another year, another weight of looking and thinking

About everyone, and then there is just music

And people walking by the shore, their humble

Bodies, their self-desires, their anguish, I see

I am a poet, I step on the same sand as Homer

Katz—an impressive Latin and Greek classics translator as well—is an inheritor of Frank O’Hara’s and Edwin Denby’s gait and startled amusement but takes us into a new zone with different urgency and perspective. I feel sane, awake and optimistic inside these meditatively alert poems. Just the right balance for the 21st century.

In Vincent Katz’s new book Swimming Home, the poet pulls out all the stops like a curator might at a posthumous retrospective, had they access to the breadth of gems that punctuated every skill of a single artist over a lifetime. The good news is that this book is not looking to explore the greatest hits of a departed Old Master, but rather the startling onward movement demonstrating the full range of humanity stretched before us, as broadly-gathered and carefully-constructed, of both a poet of the here-and-now and a poet whose language and experience represents the future. To be able to write this voluptuously but also this responsibly is certain to place Katz in a very exclusive canon of poets one can get lushly lost in & yet always trust.

Swimming Home is a group of poems written over the past fifteen years, in places as varied as São Paulo, Berlin, New York, the coast of Maine, Calabria, and Stockton NJ. One feels that Katz is indeed swimming home, that is, he perceives objects and people from the vivid, but often unreliable, motivated perspective of a swimmer, with sudden bursts of crystalline accuracy, as in the masterful “Sidewalk Poem” that closes the sequence. Here a whirlpool of visual particulars, ending with: “light is guide, beyond brick, granite, if you can follow, / in sky, on building, drifting off banner, on person walking,” is cut short by a moment of shocking certainty: “They may not think poetry’s important / but I know it is important.” After taking in Katz’s huge, teeming opus, few would disagree.

Vincent Katz: I want my poetry to be impacted by things external to myself. I don’t want to be in control of the poem. I want the poem to be a vehicle for experiencing the world—in particular, other people and the contingency of things appearing and disappearing in my environment.

What if disorientation is a kind of joy? Equilibrium and balance are relevant to the desires constituted in these poems, but balance totters graciously besides imbalance. The indirections of poetry are, after all, what make it so compelling and revelatory to readers. Certainly, to read Vincent Katz’s poems is somewhat like planning a “sequence of activities / It is almost impossible to stay on course, buffeting of waves, / Circling, the constant losing of thing is part of the dive.” The pull of air brings us back to the surface, gasping, disoriented, is also a mode of exuberant discovery. 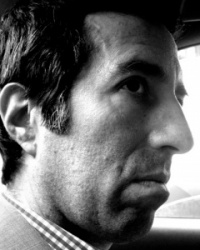 VINCENT KATZ is a poet, translator, editor, and curator. The editor of Black Mountain College: Experiment in Art, he is the curator of the Readings in Contemporary Poetry series at …