Aligned with queer theories of temporality, fragments of memoir rub against the language of psychiatric and medical regimes at the site of a body that does not conform to a gender binary. Some Animal draws out dream-like and supernatural resonances between the literature of pathology and experiences of gender dysphoria.

This remarkable, brilliant and brave poetry by Ely Shipley is an emblem for our time when US-lawmakers are making LGBTQ bodies outlaw in many states, their Christian extremism telling an entire generation they are subhuman. Float out of body with these poems then come hurtling down to land on our feet together and demand safety, equity, and a place at the table for all people. I love this book!

Not only a tremendous gift to those of us who are trans-masculine (and my god, what an ‘enormous relief comes with the realization / that others recognize one’s experience’) but for anyone who has ever felt ‘all alone inside / a riddle.’ Yes, YES may all of our animals find one another in the tender sear of this writing—disobeying borders in order to live in the love between.

Ely Shipley’s Some Animal transports bildungsroman through surreal bends in narrative where the grotesque and the beautiful crash like waves eroding shore. Here we experience the body as, rather than in, transition, laid bare before the haziness of memory and how its elision protects and frustrates. Shipley’s assuredness with the flexibility of language is beyond word play—he is not playing with us. Instead, his language is tactile and smart; it bends form and genre like gender, like blood, using story itself as metaphor, as active verb, as color, as breath. “I want to see,” the first piece muses, “I’m not sure what – a miracle.” Some Animal delivers. Read it and grow; read it and ache; read it and rejoice, then read it again.

This exploration of the body in transformation finds a form to fit the content in a flawless way. An artfully composed book of prose/poems, Shipley takes the reader through four sections, pulling in moments of disorientation, and ultimately brings the reader through the complex interior and exterior musings of what it means to have a body that is shifting and changing while occupying space. Each fragment manages both to rely on those that come before and after, and also to stand alone, enthralling us in this fraught space between becoming and being.

Shipley assembles the micro-positions of gender with such moment-to-moment clarity we sense a kinescopic effect. Gender becomes movement, time, the growth of flowers and beards, and even the poetic arcs of a strengthening voice. Shipley fits himself into himself, with lightness and depth.

“When she becomes he, people are confused, some are even angry,” writes Shipley (Boy with Flowers) in this riveting exploration of what it means to come of age in a genderqueer body. The collection’s four linked memoirs adopt a ranging, hybrid form… What sets this book apart is its focused attention to the experience of defying the gender binary, of being in a body that intimates and strangers alike are bent on denying.

Some Animal, Ely Shipley’s prose/poetry/bildungsroman hybrid, makes itself intimate with the domesticating narratives enforcing and reinforcing constraints on our bodies and identities. It seems for this reason, Some Animal so explicitly takes on, wears, and disrobes a decidedly Western and White canon of poems and writings, assuming the shapes of “Large albino snakes” and “White roots.” (Ovid’s Metamorphoses, alongside Dickinson’s “A narrow Fellow in the Grass,” Shelley’s “Ode to the West Wind,” and Keats’ Lamia, supplies the poetic heritage, while the Havelock Ellis’s 1897 text Sexual Inversion provides the dominant pathological survey.)

Ely Shipley’s long-awaited second collection, Some Animal (2018), evades category and convention. Where his debut collection Boy with Flowers (2007) offered tightly crafted individual poems, Some Animal shakes off the constraints of page and poem to take readers on what can truly be called an epic journey: into gender dysphoria and out into a world still rife with transphobia and hatred. Given the sheer magnitude of the experience his book presents, nothing but an expansive take on poetry would do it justice. 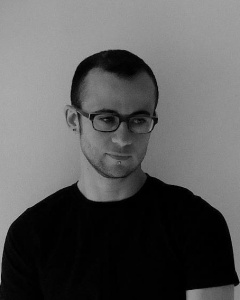 ELY SHIPLEY is the author of Boy with Flowers, winner of the Barrow Street Press book prize and the Thom Gunn Award. He teaches at Western Washington University …