No Dictionary of a Living Tongue is formidable in its explorations of art, citizenship, and life as a body amid the social, political, and electronic networks that define us, hold us together, bind us. The poems here take many forms—prose, lyric, epigram, narrative, dialogue fragment, song, musical score, fairy tale, and dictionary entry. An elegant use of sound couples with a keen and roving intelligence and a fierce commitment to social justice to create a unique and powerful collection of poems.

In this necessary new collection, Duriel E. Harris has created a primer on citizenship. No Dictionary of a Living Tongue is a living archive, collecting the muscles, senses, and narratives of a life. This is a stunning achievement, at once proprioceptive, visceral, destabilizing, and visionary.

Early on in her masterful, new book Duriel E. Harris tells us ‘speech inhabits a body.’ Everywhere her poems relentlessly fuse and refuse the borders between language and the body. Everywhere forms, meditations, notations, dialogues, and definitions are transfigured by her intense, imaginative intelligence. No Dictionary of a Living Tongue is akin to a dictionary made of shadow and glimmer, fluid and flame. This is wondrous, incalculable work from one of contemporary poetry’s supreme alchemists.

Duriel E. Harris’ No Dictionary of a Living Tongue is a muscular intellect mapping an open chambered heart. These poems, and it feels too limiting to call what happens here poems, dizzy me with their vision, and indeed to offer up a new way of seeing through their investigations into the core of something very human and very very black. Harris again proves that hers is a mind capable to breaking language down into its bare necessity, getting towards something both wild & rooted through these polyrhythmic, code-switching, swagger fat poems. You gotta check this out, fam. Here is black brilliance doing what it do, relying on nothing but itself to articulate its genius, here is the black experiment of Harris where the poet is the lab, the genius, the rat, the substance, and the boom filling the room at once.

The power and musicality of Duriel E. Harris’ poetry can strike an audience dumb. The violence in the words reveals real trauma she transforms into a transcendent experience for her readers and listeners.

In her third collection, poet and performer Harris (Amnesiac) captures the unceasing existential heaviness of being black in America. The consumption and appropriation of blackness is a major theme: ‘Aberration projected through the skein of falsehood. Bodies transported across bodies to toil & breed toil, defiled to be defiled. Economy of scale.’ Additionally, she tackles morbid perspectives on blackness as well as the stereotypes that surround it, particularly poverty and the disproportionate incarceration rates of black men. ‘I am a pretty little WIC check/ As little as little can be/ And colored girls from every hood/ Are crazy over me,’ Harris writes in a kind of nursery rhyme, one of the many ways that she juxtaposes form and content throughout the collection. She also employs a wide range of typographical styles and elements, including in one poem that resembles the jumble of an Italian futurist work, and another designed to resemble the presentation of old fairy tales. Harris renders several poems on the faces of shaded cubes. A poem composed in Arabic undermines the Eurocentric focus of American poetry. Insightful, contemplative, and often emotionally wrenching, Harris’s poems reject the idea of blackness as a monolith and reflect its multifariousness.

Harris takes the lyric I through energetic paces, bringing together an impressive array of forms and voices: lyric poems take several shapes and tones, a series of short prose pieces present various characters’ experiences, and a number of what Harris calls “graphotexts” push the boundaries of the two-dimensional page. Graphotexts are printed representations of poems that have other forms of life as live and recorded performances and/or three-dimensional installations … Harris creates authentic life in response to racist and sexist systems of power that have and continue to fix, dominate, and do violence to the “living tongue.” As she asks in the title poem, “Who will not use the heart / would not use it // and how hard must a heart be / to break. They say it is a fist / pounding on a bolted door. / Does it want in or out?” Her own acrobatic, vital collection of voices answers: the heart wants its pounding to be heard. It wants both to be allowed in and set free.

Not only is our traumatized narrator able to recall only certain events from both her childhood and adult life but also history itself; we ourselves are composites of presences and absences, selves we display and selves inaccessible or suppressed. Harris’s encyclopedic interests and references—philosophical, theological, musical, theatrical, etc.—certainly reﬂect her many selves, but she is under no delusion that they in toto comprise “herself.”

The body comes back again and again in this collection, like waves ebbing and flowing, but never far. It is through this body that Harris allows us to access, as readers, concepts like sound and silence, speech, voice, and witness. 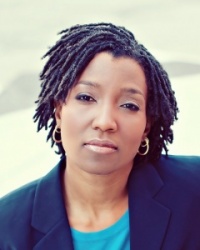 Duriel E. Harris is a poet, performer, and sound artist. She is author of three print volumes of poetry, including her most recent, No Dictionary of a Living Tongue (Nightboat …