WINNER OF THE JUDITH A. MARKOWITZ AWARD

“’Let’s deflate something that we can all agree is / monstrous, and take its air inside us,’” writes Xan Phillips in Hull. A decolonization of space and self is made physical in this. Stunning, textured, and ambitious collection of poems. This work positions snapshots of contemporary black, queer selfhood against an embodied historical backdrop in order to trace the tolls and infringements of white dominant structures and embedded historical violence upon the body. When I read it, I am reminded of the ways in which language can be repurposed as an amplification device against narratives that seek to erase, bury, and diminish. These poems articulate how living, touching, noticing, speaking, and remembering are necessary and subversive acts.”
-Claudia Rankine
“From the first poem, in HULL, I was immediately hooked. At least three ways to read it: vertically both top to bottom and bottom to top, horizontally, and each one better. This much excitement and promise comes just from  experiencing this single poem that is a collection of poetry all by itself. I can’t imagine that Xan has left anything to chance. Everything planned–brilliantly executed. Everything precise. Xan Phillips is no ordinary architect.”
-Thylias Moss
“With its queerness and excavation of history, Xan Phillips’ HULL lives somewhere between Danez Smith’s Don’t Call Us Dead and Rachel McKibbens’s Blud; the result is bodily, razor-sharp, and wholly unforgettable. I didn’t know how badly I needed these poems until they were unfurling in my hands, devastating and brilliant.”
-Carmen Maria Machado
Show More +Show Less -

In their debut collection, Xan Phillips explores embodiment and colonization through lenses of race, gender and queerness. These poems are powerful and intense. This complex and historically layered collection takes some work on the part of white cis readers; but it’s just the work we should be doing.

In this debut collection, Phillips’s poems breathe a story as long as time, in which history holds to its pattern of the same crimes committed again and again against the Black body. Into a world where it is still audacious to speak truth, they exhale condemnation, reclamation, empathy and light.

In the tradition of Natasha Trethewey and Danez Smith, Phillips sees a through line from slavery to racism past and present. HULL is their bold indictment of prejudice.

Xan Phillips talks about HULL with Franny Choi & Danez Smith on The VS Podcast – listen here!

Xan Phillips’s debut collection, Hull, is vast in both ambition and scope, striving to capture the depths and complexity of queer diasporic African identity in verse that is as fierce as it is tender and searing as it is celebratory. And, like the oceanic waters of the Middle Passage that serve as its fulcrum, Hull has immeasurable depths and dangers swirling beneath its surface.

Phillips’ work often deals with that intimacy and the greater question of being a vulnerable person in the world. Their poems confront the history and the present together in the same room, while discussing the intricacies of being a black queer person in a post-colonial world.

Hull is a reminder of our collective endeavor to swim murky waters, shark-ridden seas, just to feel our kin, to kiss our loves, to remember our tongues, to make a life.

Xan Phillips in conversation about HULL with Lucy Hayes in The Rumpus! Click here to read.

Xan Phillips interviewed by Brian Gentes after winning the Judith A. Markowitz Award!

“My favorite approach to writing has been to switch between it and painting for the duration of the day. When the paint is drying, I write. When the draft is settling, I paint. The longer I paint, the more sensitive I become to fonts.”

Hull demonstrates Phillips’s ability to expand the lyric to its breaking point, which makes this book a promising debut.

Phillips’ book is a hand carved hull. A collection of wet darkness holding celestial, limitless Black bodies, which exist repeatedly between history’s most nefarious building blocks of white supremacy and 21st century diaspora… Hull is not a balm or teaching tool, rather it’s a territory that Phillips establishes and then asks us to look upon.

Phillips produces an account of Black existence, while also summoning breath, touch, and taste as tools of emancipation and resistance. 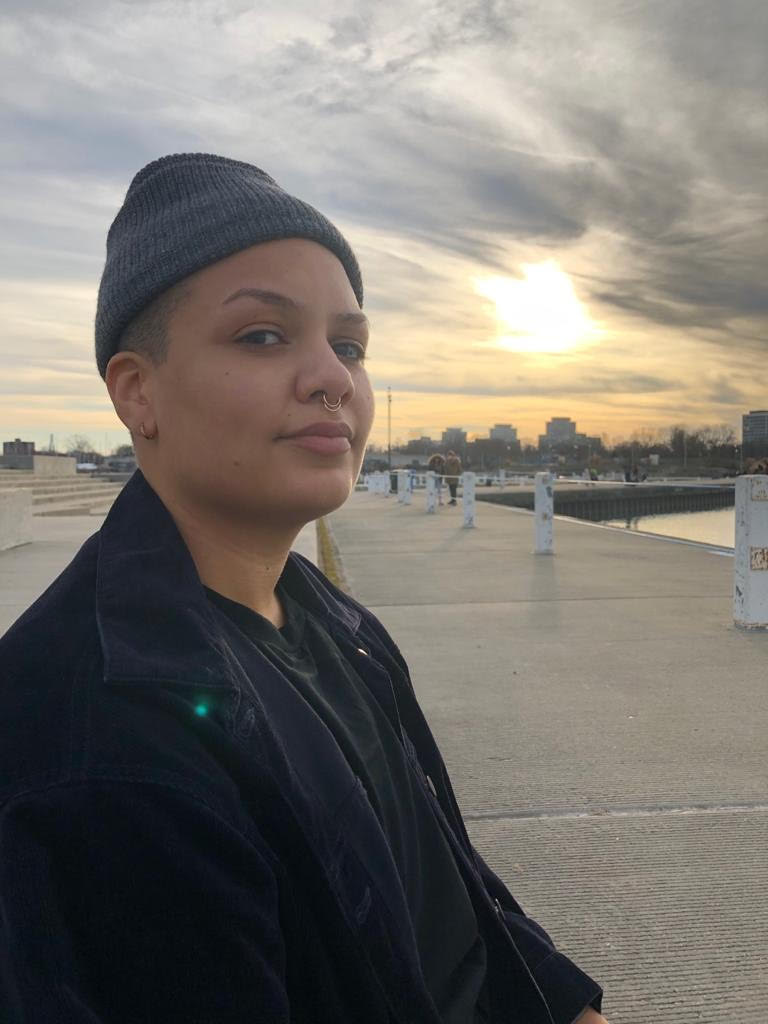 Xan Phillips is a poet and visual artist from rural Ohio. They are the author of Reasons For Smoking, which won the 2016 Seattle Review chapbook contest judged by Claudia …