The poems in Hotel abc function as ethnographic notes, exposing the fact that we are all under the thumb of circadian rhythm, struggling to negotiate our shared condition. Reporters and hotel guests leave and enter the book, revealing that the face of the beloved is also an icon, that some sounds can only be heard in certain places and that the origins of language are impossible to locate.

There’s the (il)logic of a kind of auditory-oral synaesthesia at work in these poems (or is it coexistence, as in: communion, community?), wherein attention is a kind of speaking – or wherein address acknowledges attention as its prerequisite. I can’t stop thinking that these poems are also hymns: hymns that resist the respectable spectrums of devotion and its objects, that envelop the irreverent. Hymns that are also diagnoses of our incomplete and mundane and dangerous-to-each-other bodies, expressions of sensory and extrasensory pieties from this/our inescapable circadianity. Because while “belief is hard to summon” when the backdrops of writing are invasion, these poems make repetition a mode of devotion, even as they resist making repetition a form of devotion. “I do not venerate I do not adorate / I repeat,” Gevirtz writes. And so this book enacts “the exquisite problem of repetition”: that one must (re)traverse the crises, the vulnerabilities, rehearse and rehash the “having had enough” to arrive at that crucial commentary, which is itself a kind of fidelity.”

Susan Gevirtz’s new work blends the arts of ornithomancy (bird-watching as a form of divination) and bibliomancy (finding secret patterns in texts). Hotel abc, situated “way up in the sky,” is a flowing structure akin to a flock of birds, where words reform and re-fire ancient meanings, found meanings, and broadcasts from the future. Opening the wings of this book, we join the “ecstatic birds of the no-fly zone,” accessing hidden and forbidden spaces within language, and finally recognizing the poet as the bird-handler of our words.

Gevirtz maps the space of the silently repeated in a dragnet poetics of spiraling, turbulent lyrics. These poems trawl the language of war and upheaval that abides our era of uprising and riot, drone warfare and the neoliberal economic order for those troubled words flagged for present experience, across the strata of the powerful and powerless. Hotel abc places us in a moment—a “Joyopolis,” a “state of undress a state of dress,” even a “Seaworld”—when “the future you asked about is a square torn out / of the center” a moment of linguistic and somatic attrition defined by struggle, defined with struggle: against order, objects, violence. And these poems hinge on that exact conjunctive drift. We are “bereft with desertion,” “broken into by sound.” But we are also taken by “such bewildment.” 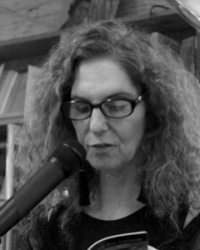