A fast-paced monologue written in a lively mashup of Englishes by an internationally known, award- winning writer and artist.

Alisoun Sings finds its starting-point with Chaucer’s iconic, proto-feminist Wife of Bath. Her forceful voice leads the way across narratives of gender, and addresses the brutality of social conventions with caustic humor. This labyrinthine text navigates love and protest in landscapes impacted by global warming, systemic violence and solar eclipses. Bergvall continues her previous work creating texts that rest on transhistoric forms of English, beyond its dominance as a global lingua franca, and places her quest in the intersections and migrations of stories and languages.

“It made me laugh out loud in some sections, nod wisely in others, want to chorus a ‘yes!’ here, and a ‘go-girl’ there. I love its generosity, and its collectivity, its command and range of tone and style, its stylishness, and its many voices. A woman from the fourteenth century and a poet from the twenty-first join forces to tell it how it is. Chaucer better watch out.”

“Alisoun’s been to hell and back as an art and fashion loving, potty mouthed, unaccommodating desiring feminist queer mother-of-us-all disobedient and irrepressible and ever deep and vulnerable language breaker.”

“As a reader the work is transportive, I enter a new and unfamiliar space as I read this, it feels almost archaeological in nature. There are worm holes here, carved out through space and language, stories and places, centuries collapse, gaps in time dissipate, the medieval and the modern merge.”

“Ecofeminist writer and performer Caroline Bergvall follows her earlier brilliant Meddle English by dialoguing with, not quite melding into, Chaucer’s vernacular muse, the Wife of Bath. An inspired, tragi-hilarious mixing and meddling of modern and medieval Englishes, a rallying cry for bio- and-linguistic diversity, a ferocious unleashing of sexual and bodily power.”

There’s something echt modernist about Caroline Bergvall’s longterm project of turning over, repurposing, and generally fucking around with the western canon… Begvall’s Alisoun has the linguistic panache, the historical learning, and the theoretical chops not merely to rehearse a thousand years of oppression and resistance, but to offer in the poem’s final passages an infectiously uplifting — even for the cynical — call to arms.

The language evolves here, making Alisoun solidly in the forgotten and misunderstood past, while invading the present. This is a manifesto, an affirmation of identity, a recognition of a voice finally given shape.

GN There’s a technique I associate with your writing: including various points on the journey of translation in the text. Lines repeat themselves—one in a more contemporary English, one in a more transitory state or Middle English. The work of the middle ground has so often been scrubbed from literary cultures, and it seems that the middle ground is precisely where you work. Is that just a natural result of adaptation as a practice, or is it something you do intentionally?

CB That’s right. I have it a bit in Drift as well, with “The Seafarer,” using a process of translation as a way to reinvent or recreate the final word so that by explicating different spellings, different words for the same words, or through homophonic translation, there’s historical depth. It opens up the semantic field. It’s a way of writing.

In Alisoun you find it also in the pronouns, with “het, hem, em,” which allows us to rethink what is actually being said: Is it a pronoun? Is it a verb? That kind of play on the pronoun is similarly translated. Rather than having a translator go from A to B, it becomes an AB-type thing. Translation doesn’t have a resting point neither here nor there. But it spans that stretch. It comes across so many interactions. There’s no final mastery in translation because it’s taken over by the performative one way or another.

Clare Lees: What your work does for me is to pull forth the courage to be creative and critical, which is in fact what you do yourself.

Josh Davies: Could you say a little bit about your own relationship to the practice that Clare sketched out? What is the relationship between the creative and the critical?

Caroline Bergvall: To an extent I have called my work—also my performance or collaborative work that you see photos behind me circulating, and Alisoun is going to be part of that in the future—these interdisciplinary practices are also research led. In a way, my first motivation is to be looking at documents that can be from recent history or much older history, and then to start to find a way—how can I, or and why would I, reimagine or relocate this material into other contexts?

If we cluster, grow broader, aggregate, say yes to both ourselves and the needs of those outside our own immediacies, Alisoun suggests that we will be in good company for the work of pleasurable, collective living.

Resounding. Re-sounding. Resonance is the name of the game Caroline Bergvall presents in all those language games she plays seriously, and serially, more than totally.

-Kyoo Lee, Spitoon Collective
Across her trilogy, Bergvall’s hystoricism has made it possible to imagine and occupy such strangeness—to move in a poetics and politics where “the fever and collected energy” of popular protest extends deep into the past, involves its fighters, fast-talkers, and wanderers.
-Toby Altman, Chicago Review

Alisoun Sings offers a radical approach to the dramatic monologue.
While preserving the basic integrity of a single voice, it fashions a communal
female voice based on literature (and songs) across centuries – but with
“Alisoun” and “Caroline” at its base. The resulting voice is fluid, queer,
sexualised, angry, ecstatic and self-reflective. 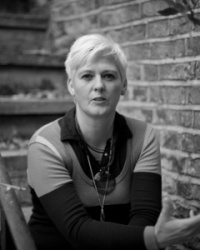