An arresting lyric exploration of the performance of love in language

The Devastation, a performance novel or poem, is based on the fallibility of a single image: a sea-wreck in language, the lovers on the floor of the sea, a sea of poetry, current, currency, connection—the world. How do we value “impoverished speech” or try to find abundance in impoverishment? A narrative that stems from “an image that is never exhausted” whose affect pervades the function of the whole, The Devastation is a lyric exploration of relation and community.

Melissa Buzzeo delivers language from its hidden sources and outer fringes with extraordinary poignancy and precision.

“Buzzeo’s writing in The Devastation — as in her previous books, For Want and Sound, Face, and What Began Us — is incandescent. Dealing with loss, with the use of language as a healing practice, and with catastrophe (both personal and communal) and its aftermaths, The Devastation has been described as “a literature of encounter,” as well as “lyric exploration[s] of relation and community,” manifesting a “great capacity for openness” at the intersection of “poetics and healing.” In an interview conducted by Bhanu Kapil, Buzzeo demonstrates the degree to which writing is, for her, a mode of survival. Hers is a generative poetics of generosity (enfolding all of generosity’s cognates, including “gender,” “genre,” “generation,” and “gentle”); she approaches truths, passionately and directly, as large philosophical questions.

“‘The disaster ruins everything while leaving everything intact,’ writes Maurice Blanchot. Melissa Buzzeo’s fourth book, The Devastation, is an embodiment of this dialectic. Buzzeo writes disaster into being, building form and language from memory and absence—pulling concealed, dormant, and suppressed language from her own body, which she seeks to transfer into the body of her book. Language creates a recess of connotation where the true value of words are obscured and must go back to a physical form: body, a person, a place. In the physical absence of language, what remains is its meaning, and its reverberation. It’s no coincidence that Buzzeo frequently uses the ocean and vast watery spaces as metaphors: they reflect the immensity of her devastation, the size of her loss. What was once the sea is gone, and the landscape, the ecosystem of this environment, is now an immense basin. Its purpose (to be filled, to house water that acts as mooring) has vanished. And Buzzeo is emptying the basin, scrubbing it clean – doing and undoing what has undone her. Her writing details the silhouettes of subjects, of shapes composed of their surrounding affects, and only hints at physical presence. The eroticism of the text is written into the book itself: a collective reservoir of what is no longer embodied.

Within all of her work, Buzzeo is spiritual, linguistic, political, and poetical. She writes from a space of healing, with psychological resonance and a tender sensitivity towards trauma. She may be detailing memory, but she is also creating new space for a personal devastation that has ruined language and wrecked writing. As water passing over stones, said trauma has eroded body, memory, and mind, leaving behind objects laid smooth, but indelibly marked by contact.”

“Buzzeo rewrites her text in order to unwrite the overwhelming loss. Language cannot hold her original intention — it instead overdetermines the importance of loss as an event. How to exist despite, in spite, ahead of language? Buzzeo refuses the smallness, opting instead to write a text where the gestural replaces the linguistic. The Devastation explores life following an incident only named. The reader is presented with this recurring image: two lovers at the bottom of the ocean floor, the decaying remains of a disaster that emptied the waters, drained all pronouns, left only the language of reaching and pulling. In another work the devastation — the loss — would subsume the remains, mistaking silence for nothing. Here, the text is what’s left behind; that which no longer exists (as you would think) returns to communicate its forms. Buzzeo uses an abbreviated syntax that takes on the properties of water — it releases, floods without warning, trembles with moments of stagnancy, reflects a pulsing rhythm. The book’s movements enact an accumulation of what cannot be uttered aloud, of what stays silent but potent.

You start with a page: one that has been torn out of your mouth

You fold it in half: you stay.

“Whether she is a poet or a philosopher—and she is possibly both—Melissa Buzzeo writes novels of high adventure, and The Devastation shows her mastery at the art of making the reader look every at once for the adventure that lies within. Like the eerie amulet worn by the cover model on the front of her newest book, the text itself both mirrors and holds up to light a secret knowledge, but one which begins to glare and throb in recent years—the years of extreme climate change—into being, so that even children, even dogs and cats, know the signs and the outward lineaments of what was once the deepest secret of the world—its promised destruction.

Animals and little ones know that we’re all in it, like the filigree splayed around the pale white opal in the heroine’s necklace, in Andrew Kenower’s exquisite photographic rendering. “Sometimes we remember the properties of matter/ And as such we cannot touch/ The partitions the sky took of our mouthes.” In reading The Devastation readers will be reminded, some of them, of the so-called “War Trilogy” that the poet H.D. wrote in the 1940s in the middle of Hitler’s blitz of London, and the poems that Edith Sitwell wrote during the same great devastation, in which she too took on the antique language of, say, the King James Version of the Bible, like “mouthes,” where we today would say “mouths,” had we still mouths to drink water from. After several books in which water was the main element, The Devastation threatens us with a dryscape. I asked the author about this disparity—with doubt stabbing me: *was* it disparity, or its human face, despair?”

“I wanted to water that which was not there. The partitions fell. There was no matter.” Buzzeo’s book-length poem, written mostly in prose, imagines two lovers who survive the “Devastation” and lie at the bottom of the ocean. Water is a philosophical problem, a gap in meaning, a void, a space beyond and after civilization. An “I” and a “you” try to meet within that void and find their own radically new way of life, even though “The water killed itself./ The water will never come back. We will die lapping after it.” The urgency that Buzzeo (For Want and Sound) usually prefers, along with her telegraphic images, suggests alarm about global climate change, but the dominant mode is less political or ecological than philosophical. Buzzeo draws on radical Francophone prose writers (including Duras, Bataille, and Deleuze) as much as she draws on English-language poems, writing for readers familiar with their idiom. The result is often repetitive, and feels long for its genre, while still achieving a memorably insistent directness.” 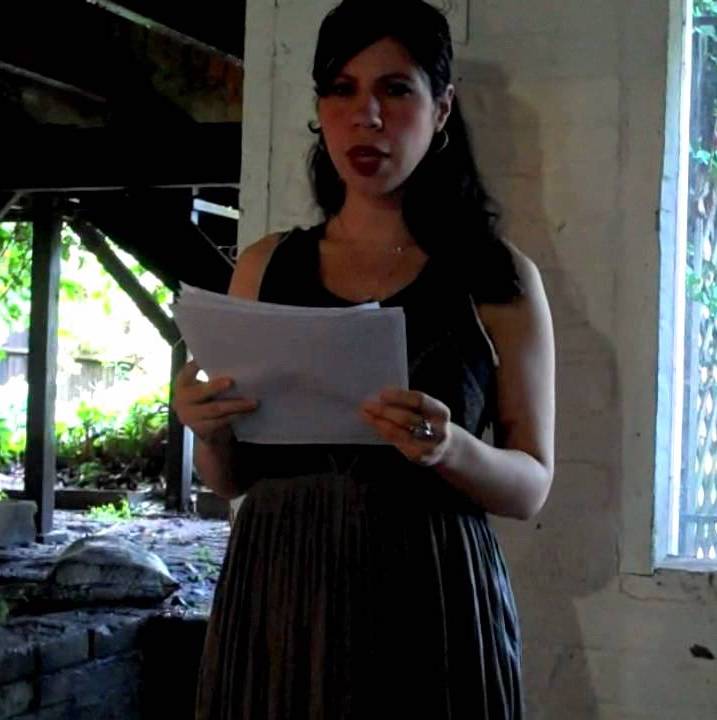 Melissa Buzzeo writes a literature of encounter, but also: descent, healing, refusal. She is the author of four full-length books: The Devastation(2015), For Want and Sound (2013), Face …