The winner of the 2018 Nightboat Poetry Prize that enters the space of ritual, incantation and trance with a stunning assemblage of images and structures.

In Like Bismuth When I Enter, Carlos Lara engages language in the purely creative aspect of language–it’s synthesis of dream and waking world. In these vibrant, hallucinatory poems, inspired by the element Bismuth and its iridescent surrealist structure, Lara attempts to produce a collective surge of new imagery, a new mind state, and structural undoing. Like Bismuth When I Enter captures that moment when the universe strikes you with an unmistakable reminder of mystery via the quotidian or the elemental.

Phrases, sentences, lines, and fragments scintillate and spark with multiple realities. Lara has risked a great deal to transcend sense and form as we understand it to make a remarkably fresh and majestic book. I feel returned to the primordial, the preclassical, the prelingual. Stein wanted to make words new; Lara has picked up the mission and carried it far.

Carlos Lara’s Like Bismuth When I Enter consists of language that transmutes itself as a quantum hawk flying through non-sequential fractures of existence. His lingual exploration teems with the uncanny as it explores random planes such as a “numb Serengeti of drool,” all the while “approving of love and life.” Via tangential subversion, Lara’s language expresses the genuine pedigree of the poetic act.

Some poets think beauty is truth; others think truth—bare, odd, arbitrary, unrestrained—is beautiful. Carlos Lara falls in with the latter. Poems of such poets are often called “difficult.” But what if difficulty wrote its own book of poems, about what you think of it and how that makes it feel? Well, Lara read that book and then wrote this one, answering difficulty’s prayer for itself: Show me to be “real life true freedom”—“not explained yet that is also beauty.”

Realizing an abstract freedom opposed the determinism of everyday life, Lara’s poetry has an intrinsic social value. With an epigraph that reads “for my grandfathers,” he sets the tone for a book of origins, only these origins point back to a multicultural, inter-traditional history, and then encircle the present moment like a warm sirocco wind. Lara’s linguistic consciousness is less a juxtaposition of phrases in the form of collage than a kind of attentive listening that discovers harmonic connections between disparate conceptual planes.

Like Bismuth When I Enter shows a technician at work on the aesthetic forces of production, an enthusiast laboring under the rusty hood of Surrealism.

Lara’s work—aggressively gorgeous; confident—possesses a syntax (& voice), that despite its brazen eccentricity, we associate w reason.

PS: So then how did you decide what poems to include in this collection?

CL: Well, they were all part of the same transformation. It feels almost evolutionary. I mean, they naturally belong together. The way animals are echoes of both history and each other, I suppose. These poems are at least of the same family. But “theme” is not how I would describe it. “Theme” to me is without consequence. Every word and combination of words and evocation therefrom is essentially “of value” in a way that to call it “theme” is purely reductive. “Theme” is garbage. “Theme” is the Western tendency (and luxury) to hierarchize after observation. I come from people who react necessarily and instinctually. This doesn’t align. But if you had to choose a theme, I guess it would be “pure creation” or “true freedom” or “flavor town.”

How did you come to poetry first, as opposed to, say, fiction or non-fiction?

CL: I came to poetry out of desire. Is there any other way to do it? A desire for, what, disaster? For the otherworldly, for life, for multiple lives, for dépaysement et merveilleux? No material?

I do this because human imagination is generally stunted. I do this because I was and am dissatisfied with expression. I could never find the language to describe my experience of the mind, of which the uncanniness is nothing novel, nothing special to me alone. Simply: how am I alive, as opposed to why am I alive. And this dissatisfaction with the quotidian entails an abuse of language, and poetry provides that. You know, language needs an accelerant. It needs haze. It needs fraudulence. It needs menace. It needs inconvenience. It needs shock. It needs to be dumbed up. You can’t build a society of consciously dynamic beings on pleasantries and not expect it to roil beneath the surface and eventually erupt.

Like Bismuth When I Enter is an urgent undoing of sense and syntax, an epistemology of disruption, a move toward a lawlessness of language. Surrealistic or post-surrealistic, fast-paced, not quite humorous, not quite tragic, fully felt and full of oddly affective new imageries and juxtapositions, the book invites the reader to reread past, present, and future micro and macro worlds differently, disparately, and spontaneously. 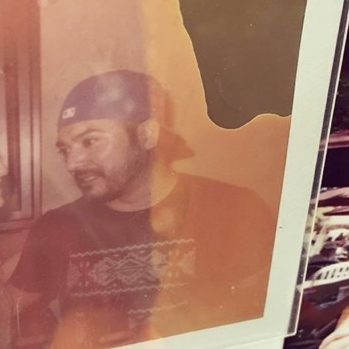 Carlos Lara is the author of The Green Record and co-author of The Audiographic As Data. The poem “God Wave” was published as a chapbook in 2018. Other poems …