I Love It Though

Alli Warren’s “I Love It Though” looks hard at the material and affective world we’ve inherited, including the ordinariness of the sublime and the sublimity and transcendence of what’s most ordinary. This book makes meaning of our contemporary moment, both sharp and vulnerable, concrete and musical. These poems are committed to living in the present, delirious with outrage and hope for something better.

In I Love It Though, growing authority and growing bewilderment appear to be out on a date, perhaps married, “the bottom / of the surface of the sound” never not in effect.  Propelled by closely parsed internal commotion, the book is a great follow-up to Here Come the Warm Jets, itself a great follow-up to the earlier books that rightly put Alli Warren on the map as a poet to watch, be reckoned with, read and reread.

Where were you when the very bird Alli Warren winged in upon opened its beak & began to speak?  I was in Queens.  My jaw dropped.  Actually it was Alli ventriloquizing the bird, right there on my windowsill, with the pigeons in the airshaft.  As I greedily thumb through the pages, honey seeps through the cracks, ‘one gape follows the next.’

The title of Alli Warren’s rich and various collection of new poems—I Love It Though—should alert readers to one of its prevailing moods, that of a skeptic’s affirmation. Being that of a skeptic, the affirmation comes with reservations. Alli Warren knows there are limits to the possibilities of any given day. She writes from the experiences of attuned observations, surveying the landscape with a hesitant but not unwilling participant’s attention to interplays of detail. She tracks ridge and crevice, inclination and fold; they belong to the topography of social landscapes and the bodies in them and also to the structures of her articulated thoughts. Days take place, abounding with forms. And thus it is that, with respect to affirmation, these poems begin with reservations. But they do not end there. If skeptical affirmation is one of this book’s moods, love is another. It is shaped out of the quicknesses of Warren’s attention, guiding her embrace of the specific given good and her grief over all that’s malevolent. This is a powerful and beautiful book, and the poems that comprise it should be read over and over again.

“Her work is quietly singular; without fuss and with calm commitment, she has for the last few years been building up an achieved and purposive poetry, with none of the bravado or braggadocio that terms like ‘achieved’ build up in the bloated corpus of their own self-awareness, bestowing laurel wreaths in parades of categorising, crowning, dividing. It is particular work, attentive to particularity, but with plenty of space to breathe.”

“Concern with humanity is thematic within I Love It Though, its tantalizing cover art of bright red paint and yarn knit intestines of some faux roadkill on the asphalt promising violence, or at least an overview of it once the dust has settled and blood has been drawn (so to speak.) The book itself is small, deceptive of the hardcore delights within its cream pages. The whole text acts like one big shiny red warning label: something is happening, be aware.”

“Beyond love itself, the book has a quiet name for this moment of poetic action that is neither a pastoral flight from the wrong life nor a demoralized acceptance of it: “kairos.” The Greek word for an opportune moment, a propitious time to act, appears twice in the volume. Off page it might mean using your Sunday to face off with neo-Nazis; on the page, it’s the moment of branching syntax interior to the title’s “though,” the parade of the old-new running through the book’s “ripe…hoard” of words, and the break at the right margin of a line where a wordless decision obtains, poised between nothing and everything: in a world where neither triumph nor defeat is imminent, ‘how else could possibility emerge?'”

“I began this response to Alli’s book on May 1, 2017, as May Day protests in Olympia, in Portland, and elsewhere are declared “riots” by police. I hear Alli claiming “every cop goes poof,” which reads like a declaration but can be no more than a wish voiced for all of us. And it occurs to me that if Alli’s book were a person, it would be out on the street in the midst of the protests–though it would probably not be the one beating the drums and leading the chanting. Rather, it would be brought a little to its knees by the persistence of forms in protest chants, and love, and meter. It would be standing under the Bank of America sign, watching and listening, sometimes ‘rooting / for him… rooting / for every tender thing / for my sister / and for you.'”

“In Notes on the Cinematograph, director Robert Bresson writes, “One cannot be at the same time all eye and all ear.” Alli Warren’s keenly attentive new collection proves him wrong at every turn. Warren effortlessly blends the analytic mind and the swarming sensorium of the body into a fleshy web of connectivity: “as an ear’s for / tonguing the open out / an ear’s for breathing / engine of thought.” These poems invite the reader into an uncanny immersion within the quotidian—akin to tasting the sharpness of sky color or watching song penetrate office walls. Taken together, their power rests not in the visionary aim of Rimbaud’s “derangement of the senses,” but in the willful blurring of the material limits of language—a rich verbal synesthesia that suggests a collective politics of bodies: muscle, blood and bone.”

“With “one foot in the office the other lolling/ about the field,” Warren (Here Come the Warm Jets) probes at what “lies between/ want and need.” Amid the comforting concreteness of fact and the energetic forces of dream and instinct, Warren sings “of something that cannot speak/ its name though its signature is everywhere.” Her poems are lean and energetic—most do not exceed a page—but they can be slippery and bewildering in their tight-packed complexity. In “A Better Way to Zone,” for instance, she instructs the tide to “bring some/ little green thing to dust/ behind my eyes// Touch the hotpoint/ and drag the tongue/ over the fat belly/ of a flapping fish.” Warren directs her aptitude for rhyme and aural texture to conveying the shape and expression of human desire (“we have nothing/ between gasps/ of great need”), as well as the political structures that have evolved through these hungers: given the tendency of borders to “burst open under their/ propensity for feasting,” Warren encourages readers to “embrace your finitude/ as the end of accumulation.”

“I Love It Though, Alli Warren’s follow-up to her collection Here Come the Warm Jets (winner of the 2014 Poetry Center Book Award), attempts to let the reader in on her awareness of the natural beauty in a rushing, busy world. Determined to recognize nature’s worth while the grand machines of this world operate around us, Warren provides us with poetry that proves that the smallest interactions with the ordinary world can bring a whisper of hope to those who simply want to adore Earth’s extraordinary offerings.”

“I Love It Though by Alli Warren despairs and delights in the contradictory riddles of this material world we’ve inherited. What is the answer to what we seek – something better; or what we desire – what is pleasurable? Warren finds sublimity in strands of affect and experience that cling to the ultimate unanswerable.”

Two Takes on Alli Warren’s ‘I Love it Though’

I Love It Though is exactly the kind of book we need these days so that we can see clearly in the gathering dark. Alli Warren is a poet I’d trust to lead us through. 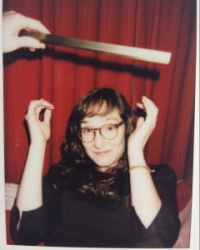 Alli Warren is the author of I Love It Though (Nightboat), which was nominated for the California Book Award. Other recent publications include Little Hill (The Elephants), Moveable C (Push …