Dianoia continues this acclaimed poet’s investigations into language, culture, and the intersections of recent history, philosophy, and human possibility

In a multigenre approach, making use of poetry, prose and graphics, Heller articulates with precision and clarity the lyric/anti-lyric boundaries of contemporary life exploring the nature of violence, politics, art, and the literary imagination. Heller’s poetry, impelled by what he calls his “thought-prosody,” in its diction and cadences, its range of references and allusions, strives to create an intelligible aesthetic and ethical vision, which “gives more force to a human argument of the world.”

Michael Heller’s new book has the energy and urgency of a dialogue on all that most matters, a dialogue with himself, with the reader, with poets and artists (Oppen, Segalen, Basho, Beckmann, Picasso), with history and terror, with the world and its absence. Dianoia is a bristling and bracing book of unwavering attentiveness, apprehensive questioning, breathtaking clarity. It marks a further tuning of Heller’s rigorous music of thought.

As usual, Michael Heller begins a conversation with his reader that I’m loath to exit until the very last words. I feel an urgency fellow-traveling with this “I” witness who has “lost my name-hunger,”as he tells us. Beset by “busyness and fear,” “not feeling like myself,” Heller’s desire seems to have shifted from constellating names to what he calls “liquid nomination,” like that of the sacred Tibetan lake, Yam-dok-Tsö, whose doubled rings escaped the first maps drawn of it. Letting singularity go for doubledness, a complex vision appears involving the “I” in often painful escape from the “armature” of the ego, its protective covering. Heller’s is an almost violently honest work of rethinking—not via abandonment, ever, but by thinking across, what the Greek diá adds to noiéo- in order to produce dianoia, or “thinking that literally reaches ‘across to the other side’ (of a matter).” The challenge in this book is to keep up and keep our eyes open, as well as remain willing to see across to what Heller sees.

“This is a ‘Jewish’ poem alright,” Michael Heller writes in the second poem of Dianoia, the most recent collection to be added to his books of poetry, now totalling more than twenty. It’s an assertion, yes, but one that is packed with doubt. On one level, it seems as though Heller is assuring himself because he’s not so sure—as if he might be searching for a genuinely Jewish poem amid stacks of his poems that are semi-Jewish, near-Jewish, or maybe not Jewish at all. But on another level, there’s also the sense of an artist standing at a distance from his art, thumb up and squinting at it to assess what kind of beast it truly is: “Hmm. Yes. This is a Jewish poem, alright.” Or is it?

The question of what makes a Jewish poem—must it be written by a Jew? Must it revolve around explicitly Jewish themes? Must it have a Jewish tone or feeling?—is not easily resolved. Moreover, the poems in the two excellent new books by American free-verse masters that are under review here are too rich and diverse to conform to any label. They are simply poetry, with all the modest grandeur that the word implies.
-David Katz, Jewish Quarterly

Michael Heller’s preoccupation with spiritual contemplation through poetry is fiercely intellectual, as it is cautious: “No one can safely say where the sacred leaves off, where the profane begins,” he writes in “Mappah,” the collection’s opening poem. The word “safely” may strike the reader as odd if not accidental, but it isn’t: in every new spiritual foray, Heller both reaches upward and instantaneously shrouds himself with doubt, skepticism, and a promise of reason. As he puts it:

… And I guess if one can call it

a belief, then mine was, if nothing else,

the Holy One had gone missing, and I was left

to raise other thrones from the now abandoned

languages of observation and objection.

Dipping into language of Judaism and Buddhism, hedging his bets, Heller does not only tease out the philosophical underpinnings of his position, but in fact, recalling, enacts the actual experience: “No place to hang one’s lonely stuff. Who can be home / to this homeless light?”

Yet, perhaps, Heller arrives at his most lyrical, transcendent moments in poetic commentary on the works of other artists. Studying Picasso’s “The Shadow,” which depicts a dark silhouette across a painting in the studio, Heller writes: “Artists cast shadows, and those who come after / pour light into the darkness of their opacity.” A profound response to “The Shadow,” its symbolism and significations, Heller’s lines stand on their own — memorable, esoteric, haunting observation on the nature of interpretation and artistic inheritance.

The living quality of stillness is central to Michael Heller’s art and in the opening page of “Lecture” he focuses upon his own walking in which he is accompanied by all that makes him who he is. He walks with Bashō, “stopping at a shrine, experiencing awe and reverence, the surround of mountain peak and foliage, the pines he likened to solitary figures”. The image from the Japanese is part of who he is as he moves through a living world of gone things. Focusing on the July bombings in London he writes of the world of the here-and-now and how it impinges upon who we are:

“The self. That’s what got me going here, the self alone against murderousness, the sudden ‘nearness (I don’t know how else to put it) to random murder perpetrated by others against innocents.”

-Ian Brinton, Tears in the Fence 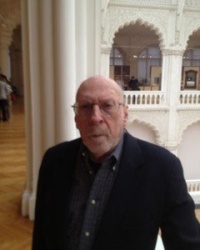 Michael Heller has published over twenty volumes of poetry, essays, memoir, and fiction. Among his recent books are This Constellation Is A Name: Collected Poems 1965-2010, Beckmann Variations &amp …