The Book of Interfering Bodies

Beginning with an epigraph from the 9/11 Commission Report, The Book of Interfering Bodies re-imagines the poet as bureaucrat, barbaric writer, and terrorist. In this book, poems that invoke the role of the writer in society alternate with apocalyptic prose pieces that recall Borges’ “Library of Babel.” In the process, Borzutzky creates a 21st century response to our most enduing twentieth century writers, from Beckett to Lispector.

This book is a fetid, fascinating torrent. Unflinching if shellshocked, Daniel Borzutzky is recording our suicide as it happens. In this accounting, minds and bodies have become fragments to be toyed with, digested and erased. Here and there are moments of genuine tenderness, humor, even lyricism, but this is one degraded body, onto which all misfortunes are inscribed.

Borzutzky goes farther than you expect, farther than you think he can go, farther than is possible, sailing past physical and national comfort zones into a seething porousness and interchangeability. It’s an assault on the idea that words keep things separate, a dangerous vertigo, the powers of horror. At the same time, he rehabilitates a cast of characters from another era, the Poet, the Book, the Poem, Poetry—even the Critic. So, bodies and bureaucracies are refracted through the belief that poetry is a force to be reckoned with. As though trying out the idea, he thrillingly puts poetry at the center of our culture: the Poet and Home Depot may not be opposites. Borzutzky is ambitious for poetry, a lavish ambition, and it seems to me he is un-American in assuming that grief and catastrophe are normal.

If Franz Kafka had been a data entry specialist at Abu Ghraib, he might have written something as fiercely intelligent and voluptuously loopy as The Book of Interfering Bodies. Reading Daniel Borzutzky is like chancing upon a secret lake full of trembling lilies that projectile vomit both poems and petroleum. His new book is not one for the literary faint of heart but for those ready to tumble to a world more ruthless, ravishing and extraordinary.

Borzutzky’s book is a book about books, but not ordinary books, no, that would be too easy, and if it’s one thing that Borzutzky’s book isn’t, it’s easy. This is a difficult book, a dense book, one full of dense imagery and denser words. 18 of 38 poems are about the books that remain in a pile, not a neatly stacked and organized pile, but a mountain: books to be stepped on to climb higher, where the stakes are high and one misstep can make the reader fall with an avalanche of books, books covered in shards of glass, books made of flesh, forgotten bodies, prayers, voices, collapsing nations.

Borzutzky, driven mad by illogic, immorality and pettiness, tries on various language of authority, but the muscular forthrightness of his prose quickly belies the authoritarian claim to same.

Irreverent, yet fervent, Borzutzky’s pen slashes, burns, and resurrects everything in its path. Gory horror adds a lurid backdrop to this cri de coeur. “They knew poetry as a saw.” Chopping, hacking, bones and guts flying—even the body of the poem seems to be dismembered over and over. 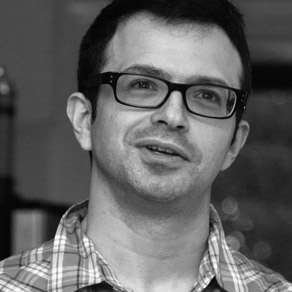 Daniel Borzutzky is the author of The Book of Interfering Bodies (2011), The Ecstasy of Capitulation (2007) and Arbitrary Tale (2005). His work has been anthologized in, among others, A …