Silk Poems presents a banquet of innovative forms. But these forms are not an extension of the poem’s content. They are adaptations, imitations, translations of silk itself—its genetic structure, the loops of its strands, its beta-weave. What if form is not an extension of content, but rather an extension of the material world—of the acts of cultivation and labor that produce what we wear, write upon, and use to swaddle our dead?

-Toby Altman, The Georgia Review
The speaker of Bervin’s poem acts as both sage and comic, exploring the text and the textile, the sense of the union of the silkworm and the poet: “AREYOUSURPRISED / IQUOTEAPOET // DONTBE / WEINVENTEDLANGUAGE.” Reflecting Bervin’s project as an interdisciplinary one—where she consulted and researched across many fields—Silk Poems asks to be read through various lenses, so its reader can return to it again and again for a newly charmed and deeper understanding.
-The Arkansas International
Silk Poems, in its small, delicate package, is monumental in scope, in its place as one part of Jen Bervin’s larger research project and also in its wide-ranging suggestiveness. The material book itself has a shiny gray cover, garment-like and silken to the touch, imprinted with reproduced strands of silk composed of tiny letters. The pages are filmy and transparent. Each page contains a poem and a small corner image of a strand that loops into longer and longer strands throughout the book. Like all of Bervin’s projects, this one is based on the fusion of text and the material world, and on careful, extensive research (a short bibliography is at the end) and travel. She makes “interdisciplinary” seem too narrow a word to describe the scope of the work, and her singular fabrication of wonder.
-Martha Ronk, Constant Critic
For poet and artist Jen Bervin, whose irreducible projects unstitch the seam between text and textile, Su Hui’s labyrinthine Xuanji Tu elicited an immediate sense of creative affinity. One of the earliest extant poems by a woman—also among the most complex and unsung—the Xuanji Tu takes the form of a 29 x 29 character grid, embroidered or woven in five colors in silk, written in classical Chinese in the fourth century. An intrepid research trip, spanning four continents and culminating in Silk Poems—a Bervin piece written nanoscale and imprinted on a silk film biosensor—led her to the Suzhou Silk Museum in 2013, where a facsimile of Su Hui’s poem caught her eye. Far more elaborate than the facsimile’s English caption, “Poem to Be Read in a Circular Turn,” would imply, the reversible Xuanji Tu can be read horizontally, vertically, or diagonally. A dizzying system of signifying vectors—the colors, for one, which map onto an ancient Chinese cosmological schema of planets, elements, cardinal directions, seasons, and numbers—gives rise to a multitude of interpretations: 7,958 discrete readings as of the last count, way back in the Ming dynasty.
-Henry Ace Knight, Asymptote

Work like this iteration of Silk Poems reminds me of how far I can push a poetic practice, where language can reside. 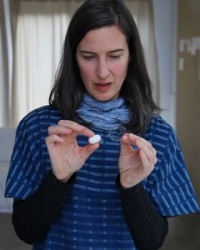