The Consequences of My Body

This sequence of short lyrics explores love, the most ancient of subjects in the most contemporary and immediate way

The varying poetics of both ancient and modern Arabic poetry inflect this book-long exploration of the materiality of the body, negotiating the terrain of love!and its denials. Zaher explores the landscape of life fraught with disappointments and occasional triumphs through fragments, lyrics, metatextual pauses, stutterings, translations of ancient poetry and the occasional late-night email. This epic foray into fraught emotional territory is alive with Zaher’s particular gift of keen observation, deft whimsy and superb intelligence.

The Consequences of My Body offers a discourse on desire as it is mediated by the electronic interfaces that obviate the need for ‘skin to skin contact’ even as they turn out to exacerbate it: email, Skype, Facebook, Netflix (and chill). Part of this has to do with Maged Zaher’s unique trajectory as an engineer turned poet who still maintains a ‘day job [as] a software guy – a field in software called enterprise architecture … it is about overarching systems design’. Zaher is based in Seattle, which with its ‘poets, engineers, investment bankers, and – of course – musicians’ provokes some larger thoughts about networks and ‘the oppressive morality of productivity we live under’. Consequences is the work of a savvy poet in one of America’s savviest cities and one is made to feel it in the academic accent of such theoretical interludes as well as in the contrived flatness of Zaher’s low-strung diction: ‘I will / Also hide hope in an okay refrigerator’; ‘Thank you also for the few moments of hope / And for sleep after okay orgasms’. In such verses, ‘okay’ is pitched rather precisely at the point where whimsical satisfaction becomes difficult to discern from jaundice. Such ambiguity offers a clue to the kind of character we are dealing with in the poem: a digital dandy.

Seattle-based poet Maged Zaher likes to send his poems swimming in this very fathomless arroyo, like the small, yet ancient pupfish of Death Valley, which I had the privilege and delight of saying hi to earlier this year. I also had the privilege and delight of spending time listening to Maged in his house, seated amidst books and plants, discussing the contemporary oral poetry of Egypt and the cumbersome hierarchies of software companies in the Pacific Northwest, over the most plump of pizza slices. So, as I began to read his newest offering The Consequences of My Body I imagined the poems in his voice, punctured by his frequent laughter, mimicking an ambulance siren.

Maged’s work semaphores a complex yet necessary balance in the realm of contemporary poetics he is as much a sculptor of minutiae and momentary confessions as he is a weaver of larger sociopolitical crises and transactions, coating our solitary and collective worlds like quick-drying cement: each a very delicate skill. In his hands, the thread of any single line can easily be cross-stitched with another, seemingly disparate testimony and yet when perceived together, their combination is as revelatory as it is amusing, fragile, contradictory and yet all too relatable.

Body is a book that is interested in corporeality: the awkwardness and wondrousness and confusion of having a body, of moving that body through the world, of using that body to communicate with other bodies.

Zaher employs a number of different poetic forms to examine his subject: short, experimental poems; more formal poetic traditions; Facebook posts; essays. He circles the globe in his body, indulging its whims and fretting over its failings. All the while, he wonders if he is doing the right thing, if he is in the right place, if he is being a person in the right way.

And his body falls in love. A lot. Much of Body is turned over to love letters — more properly, love emails —written to undisclosed recipients. “[M]y boundaries are a mess,” Zaher writes. But he’s not talking about the boundaries of nations, for once. “I am terrified of taking a chance — actually in this slightly drunk state — I am loveable — and I think parts of you are softening up for me.” Later, he writes, “Forgive me if drunk emailing feels disrespectful — I drank after I read your email” and he concludes, “Enough of this rambling — I will push send — you are insanely beautiful.”

So if all people are political, and if all people feel love, does that mean that all love is political? Zaher acknowledges in Body that “aesthetically, it took me a while, but I can confirm now that I am a love poet.” The wine-stained love emails that barge into the more thoughtful passages on revolution and nations are interested in seduction, in the crossing of boundaries, in the collusion of bodies. They do not feel out of place in the midst of all the violence and politics.

In “Consequences of My Body,” Maged Zaher uses his poetry and prose to tackle both traditional and new explorations of eros. His lyrical outbursts and stark, dry declarative statements illuminate romance in a way that clinical discussions cannot hope to duplicate. 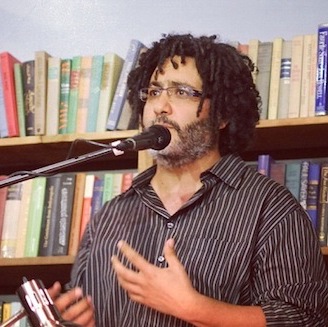 Maged Zaher is the author of six books including a collaboration with Pam Brown, and a translation of contemporary Egyptian poetry. He is the recipient of the 2013 Genius Award …