By late 1979 I felt that art and poetry in Brazil had ossified around modernist narratives, and that it was time to launch a new movement, this time focused on the body as a meaning matrix. My idea was to simultaneously foster formal experimentation and political activism centered on what I then described as “pansexuality”. By this I meant that all forms of non-normativity would have a voice. In sum, a movement to end the explicit or implied notion of a universal subject, to erase dichotomies and hierarchies between popular and erudite cultural forms, and to move unconstrained gender expression center stage. To achieve these goals, the movement would subvert the semiotics of pornography and place it at the service of liberation and imagination. I identified potential collaborators and launched the movement with an event on Ipanema Beach in February 1980. 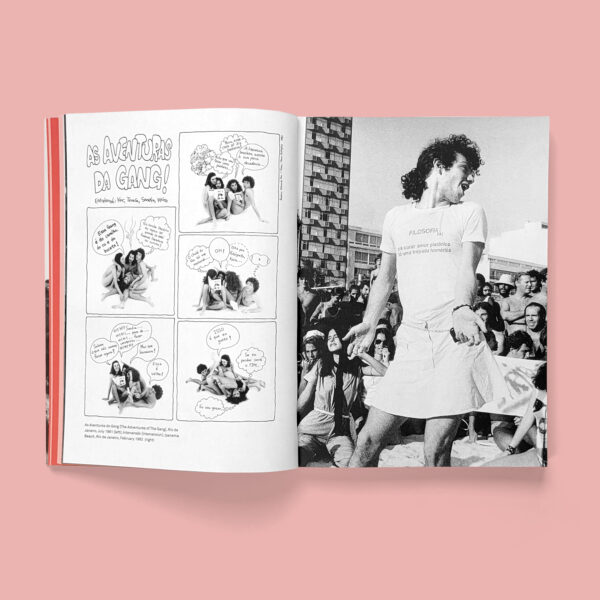 What was the significance of pornography as a theoretical idea and metaphor for liberation against the Brazilian dictatorship as utilized in the Movement? What do you most want a contemporary reader to know about life in Brazil in 1980?

If we talk about precedents, we also need to say that there are countless precedents to both the Brazilian and the global avant-garde. For example: it is commonly believed that visual poetry starts in Brazil in the 1950s, but this is incorrect. There are examples of visual poetry in Brazil in every century before the twentieth century, starting with the Baroque poet Gregório de Matos. In fact, there are also examples of visual poetry in Brazil in every decade of the twentieth century before the 1950s. This material would make a remarkable anthology. Concerning precedents to the global avant-garde, the earliest examples of visual poetry were created by Simmias of Rhodes before 300 BCE. His carmina figurata include the well-known “Wings”, “Egg”, and “Hatchet”. There’s continuity from Simmias of Rhodes onwards, in a tradition that includes Optatianus (4th century CE), the medieval Jewish tradition of micrography, European Baroque poets (as captured in Ana Hatherly’s phenomenal book “A Experiência do Prodígio”), all the way to Apollinaire, Cummings, etc. So, yes, there are many precedents, but the global avant-garde is not the starting point. The work I developed in the context of the Movimento de Arte Pornô (MAP) shares the same ancient sources of the global avant-garde. I don’t work with the concept of “influence” for this reason: at the end of the day, we all share the same ancient sources. Think of Laura Swift’s remarkable recent edition of Archilochus’s poems and the birth of lyric poetry. Archilochus flourished c. 650 BCE and is the earliest known poet to have written, not about heroic feats, but his own emotions and experiences. Having said that, my Pornograms are very different from these traditions, as in this series the actual living body is the written text or the writing medium, depending on the work. The yellpoems were focused on transforming the stigmatized and negative charge of words in common discourse into positive meanings. Each body of work I developed in the MAP had its own creative vectors. To return to the poems nearly 40 years later was challenging in several ways. The research in my archive was significant and took several years. But the most challenging of all was the translation. The original works mix slang with erudite references, not to mention context-specific allusions. English and Portuguese syntax are fairly different. It took me many years to produce translations and write notes that effectively convey the meanings and the revelry of the originals. All in all, nine years. I’m extremely happy with the result. 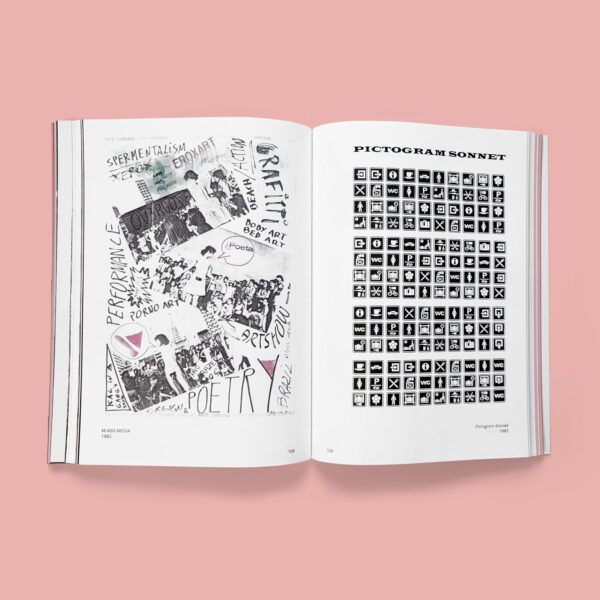 At the time I was a skateboarder and did body surfing. I also played basketball. I lived by the motto “mens sana in corpore sano.” Even though in intellectual circles sports were generally looked down at, I thought that a balance between the physical and the mental was key. I’ve always read a lot, since I was a little boy. As a child I spent all my allowances buying and reading encyclopedias, which were sold as fascicles in newsstands. Languages were also important to me, as my parents were polyglot. As a teenager, I rigorously read poetry from different countries and traditions, and also studied art from the impressionists onwards. Just before launching the MAP I was an editor at a poetry magazine. Concerning the relationship between the Porn Art work and my mature work, I’d say that a clear thread that connects them is the central role of language and the body in my practice. Most importantly, and independently of the specific material solution of this or that work, I still have the same spark and curiosity that I had when I was 17.

One of the things I love the most in this body of work is the sure range of mediums and materiality, from performance to mimeo publications and artworks created from scavenged materials. Some of the pieces were very ephemeral, which made it a challenge to archive and document. Can you talk about your use of genres and mediums at the time and how you went about building the archive of images that are reproduced in Porneia?

Most of what I did between 1980 and 1982 was to be performed, printed, or posted. The goal was to reach out. Performance involved immediacy and local audiences. Printed publications circulated. Mail art could be interactive, extended the work to international audiences, and also enabled insertion into alternative networks. As a result, originals were left behind and many did not survive. So, to prepare the book, many works had to be scanned from the printed publications. In some cases, when I did not have the original or the publication in my archive, it was necessary to research institutional archives and obtain the work there. The whole project took nine years. The yellpoems were written for performance, having as one of their goals the transformation of slurs into positively-charged words (what is now known as ‘reclamation’). I made the color photocopies against the grain, by using pre-printed wrapping paper, since actual color photocopiers were not available. The typewriter work preceded my digital debut, but also allowed me to create typescripts for pre-visualization prior to programming. The book includes one of my earliest digital works, Geometria do Êxtase (Geometry of Ecstasy), which I programmed in BASIC at the time, and recently restored. The MAP explored the fusion of elements traditionally perceived to be incompatible, such as geometry and pornography, for example. Indeed, in addition to its political commitment, the MAP was formally experimental. Regarding the archive, I have made a concerted effort, from the beginning, to preserve as much as possible. It was difficult, with my constant moving, but with patience and perseverance, and a little bit of luck, I managed to preserve the most complete archive of the MAP anywhere. Eventually, the archive became an invaluable resource when it came to preparing the book.

EDUARDO KAC started making art as a teenager in Rio de Janeiro, when he was a central figure in the Movimento de Arte Pornô (Porn Art Movement) between 1980-1982. He’s now recognized internationally for his telepresence and bio art. Kac’s work has been exhibited internationally and is in the permanent collections of the Tate, London; the Victoria & Albert Museum, London; the Museum of Modern Art in New York; and the Museum of Contemporary Art of São Paulo, among many others. Kac’s work has been featured in contemporary art publications (Contemporary, Flash Art, Artforum), art books (Phaidon, Thames and Hudson, Oxford, MIT Press) and in the mass media (ABC, BBC, PBS, Le Monde, Washington Post, and the New York Times). Kac has received many awards, including the Golden Nica Award, the most prestigious award in the field of media arts and the highest prize awarded by Ars Electronica. His work is documented at www.ekac.org.