Dwelling in the interstices, In Brazen Fontanelle Aflame is an ornate collapse, a sumptuous yet horrified exploration of the violence inhered in specific landscapes and ecosystems by the logics of capital. It is an attempt to resist what Lisa Robertson calls “the language of genocide” by mirroring, perverting, and subverting that language. Perhaps most importantly, its poetry is a call to bust forth and out against systems of oppression in a “palatial, treasonous moiré.”

I am still learning how to read Ted Rees – my tongue still caught in an utterable glue. I am still learning how to live with this book, in a world Rees magnificently lays bare and road-kills. The poetics here is freefall…Here is an urgently aural bioacoustic poetics, a space of seismic crossings to where we can all bring our own stupefied poems. “Drink beer. Fly a kite.” Once and for all, let’s be darlings of the blank.

“In Brazen Fontanelle Aflame kept me involved and fascinated. It’s hard to put down. It offers a perspective on contemporary U.S. social problems that comes from a narrative voice like no other I’ve read in recent American poetry. I loved the intensity here, and the insight, and the sheer exuberance of the language. Rees is a poet determined to say whatever he needs to say to make the world more survivable for him and many others who live on the outcast edges of a culture too often committed to ignoring its ever-growing human and environmental disasters.”

“Normative conceptions of time segment in seemingly the uncomplicated sections of ‘past,’ ‘present,’ and ‘future.’ Ted Rees’ In Brazen Fontanelle Aflame attempts to collapse these categories into the tangled non-whole that they are. Central to this collapse is capital and the different formations of violence through which it maintains itself. Rees’ work evokes vivid sensations, particularly during the moments in which it deconstructs spatial time. He navigates through the futility of speaking about an intelligible colonial ‘past’ as if the present is not rooted firmly within it.”

“Rees confronts the ubiquitous destruction that pervades the vulnerable world as a consequence of humankind’s sophomoric, pompous negligence and cruelty in his cerebral, if convoluted, debut. Bursting with a renegade’s rage, Rees blends anticapitalist and antidiscriminatory sentiment into a lyrical stream of consciousness that congeals in a sort of hybrid queer, ecopoetic, intertextual manifesto.”

“Since a lot of my time has been spent living in or around “the third landscape,” my work has been able to meditate on the realities and vagaries of such spaces. Part of this is that I have often been unable to afford to live in other situations, but another part of this is that I am deeply uninterested in middle-class values and lifestyles.”

“I like to think of parts of the book as a type of ‘documentary poetics,’ a narrativizing of subjective experience and recognition of objective material conditions and histories. While vastly different from all the brilliant recent examples of documentary-oriented poetic work— Mercedes Eng’s Prison Industrial Complex Explodes comes to mind— one of the major concerns of In Brazen Fontanelle Aflame is the way in which people interact with these material conditions that surround them, which brings us back to the third landscape, in some ways. I guess that what separates the book from more explicit examples of documentary poetry is that there is little naming of these conditions and histories, and more a dwelling within them and describing them as a method towards understanding them.” 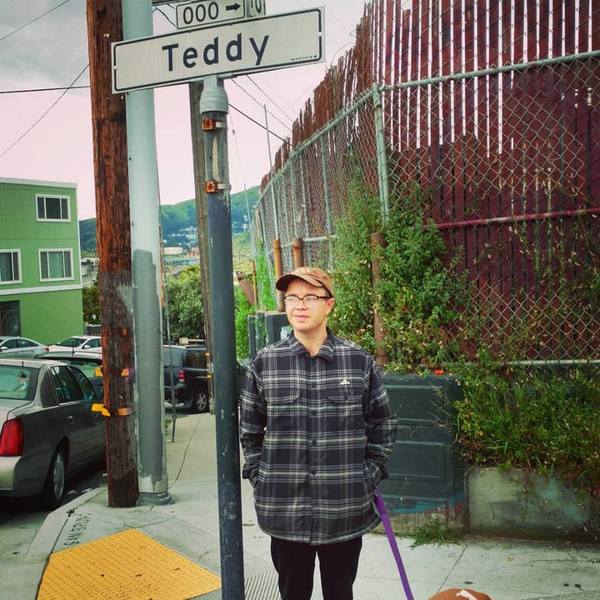 Ted Rees is a poet and essayist who lives and works in Philadelphia. His first book of poetry, In Brazen Fontanelle Aflame, was published by Timeless, Infinite Light in 2018 …