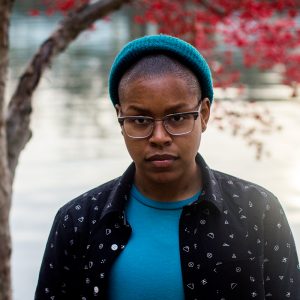 Cyrée Jarelle Johnson is a writer and librarian living in New York City. His first book of poetry SLINGSHOT will be published by Nightboat Books in 2019. He is currently an Undergraduate Creative Writing Teaching Fellow at Columbia University, where he is also a candidate for an MFA. His work has appeared recently in The New York Times and WUSSY. He has given speeches and lectures at The White House, The Whitney Museum of American Art, The University of Pennsylvania, The Philadelphia Trans Health Conference, Tufts University, and Mother Bethel AME Church, among other venues. His work has been profiled on PBS Newshour and Mashable. Cyrée Jarelle has received fellowships and grants from Culture/Strike, Leeway Foundation, Astraea Foundation, Rewire.News/Disabled Writers, Columbia University, and the Davis-Putter Scholarship Fund. He is a founding member of The Harriet Tubman Collective and The Deaf Poets Society.