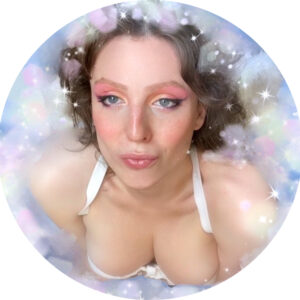 Aurora was born in Hong Kong, has lived in Texas and elsewhere, and lives in Brooklyn. Her writing has appeared in Zoetrope: All-Story, the Renaissance Society’s exhibition Nine Lives, on her Onlyfans, and in RISD Museum’s exhibition any distance between us, on view until March 2022. In Summer 2020, she was interviewed for the Yale Literary Magazine’s living author series. She is a frequent collaborator with photographer Elle Pérez; their portraits of her have appeared in the Carnegie Museum, the Whitney Biennial, Aperture magazine, and elsewhere. Her debut novel, The Fifth Wound, is forthcoming from Nightboat Fall 2022. She is on Twitter @silicone_angel.