Snigdha: Your practice of poetics draws and expands upon the process of the salp’uri dance form. What was the process of cultivating a relationship between the dance form and your own writing? And specifically with Aerial Concave, how did you come to develop this relationship?

Juliettee: Cultivating a relationship to the salp’uri dance form took a leap and feeling my way into it. I had seen footage of this dance being performed and was haunted by the contrast between its deliberate tempo in careful steps and the energetic discharge I felt in the sash as the dancer tossed it aloft to hang slowly in the air, and the power with which they pulled it down in a fast flick. I reached out to Korean dance programs in Washington DC, New York, and Philadelphia to inquire about studying with them. The only teacher who got back to me was the one based in Philadelphia, who informed me that she had retired but could work with me to learn fan dances. When I expressed my specific interest in salp’uri she told me she did not teach that form as it wasn’t “Christian” and encouraged me to consider the fan dances instead. This made me incredibly sad, as I felt that something incredibly deep rooted about Korean-ness was being denied to me. I also saw Christian neo-colonialism eroding something deep that should be treasured; I felt outraged and deeply betrayed by this elder.

Her concerns around salp’uri are probably related to it’s shamanic roots. It’s often been described as a dance of exorcism, but for me I see healing and psychic discharge—a way of integrating and releasing anguish. It’s a dance that is deeply threaded through with Korean Han, that very hard to describe cultural ethos that shapes a specific melancholy, anguish, and intensity that roots deeply in Korean identity.

When I heard this from her and realized I likely would not be able to find willing teachers, I took a leap and decided to try and work through the dance form myself. I’m careful to describe what I do as more of a poaching than a faithful performing of it—I feel lawless, but also righteous in my exploration. I have not had formal training, and the gestures I find myself moving into are not gestures that were shown to me. However, when I started with the movement, I felt strongly that I was in spiritual alignment with the dance form’s roots, as my goal was to communicate—to transform my body into a conduit that could transmit and receive. I wanted to gather and release this intense planetary precarity, sorrow, and resilience towards life that I felt surging through everything—and I feel I accomplish this when I move thoughtfully in what I feel is a salp’uri alignment. 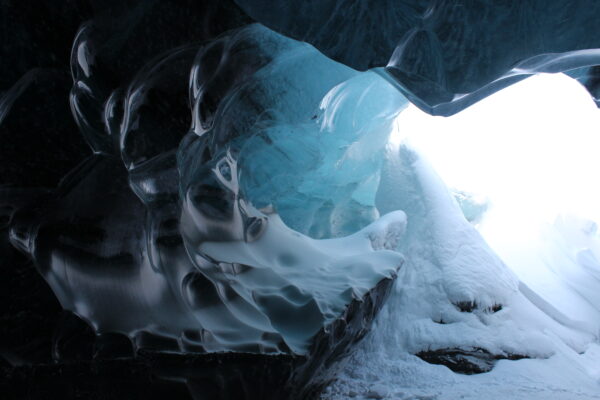 Snigdha: Aerial Concave investigates the blue light of solar collapse and its relationship to a deep state of grief. Yet the cover is red, which also offers a different dimension to the exploration of light in your book. Can you speak to the cover choice and the significance of the colour?

Juliette: I have felt inundated with blueness ever since I wrote Solar Maximum and continue to feel quite haunted by it. Perhaps my last several books have been attempts to discharge that blue… as a writer, I began to suspect I was tinted with the blueness of catastrophe and stopped writing for about two years. It’s hard to walk about and feel a glacial bucket slowly tipping inside your heart, but that’s how I felt. I distracted myself with new jobs and a move and attempts at domestic cohabitation. Obviously I didn’t stop writing—yet when I came back to it, the blue remained. I’m making some peace with that?

That blue still emanates throughout this book, but I also wanted the cover to reflect back an embodied warmth, which I feel is present in the more explicit dance references in these works. When I was communicating with Nightboat’s designers, I described the fleshy red of sunlight through closed eyelids, which I can recall and feel with intense acuity when I remember napping in the family station wagon as my mother drove home on summer days. That red is nostalgic, familiar, internal, but also encompassing. My child consciousness was not just my body, but the vehicle, the way the tires gripped the road, the oaks that flickered their shadows as we swept by. The red is intimate and personal in ways that the blue was maybe not communicating as explicitly. I love that the cover also looks like a captured photon. I love that sense of flight, of duration. It feels accurate to this text.

Snigdha: The book straddles the lines between many genres and types of writing, from investigative to ecopoetics to dance-poetry to lyric and episodic. How did you approach and cultivate the shifting and intermingling genres in the book?

Juliette: I love things that skirt, traverse, thread, dial in and out, remain. I love the textures that different genres and registers of language conjure forth. I love seeing these happen over time and slowly. The journal-ish bits, personal notes, poaching of Sir Isaac Newton—all of that felt in line with the way I was finding and framing language before.

I think the shape finds itself as the work finds itself, and those emerge congruently. For all the years I’ve been calling myself a poet, I have less certainty or clarity what that even means. I feel like I work in the most abstract of mediums, and the genre hopping or threading or perforating or whatever one calls it helps the sentiment to emerge.

I’m not very craft oriented as a writer and often feel my tools are quite blunt, but they are collectively gesturing at the larger inexpressible thing I am trying to discover or relocate or summon. They are not the moon but the fingers in the hand pointing to the moon. Yes, I’m referencing Bruce Lee’s Enter the Dragon.

Snigdha: You cite Theresa Hak Kyung Cha and Cecilia Vicuña as influences in your work, particularly in terms of your use and incorporation of visual elements. Can you speak more to this influence and the function of images in the book?

Juliette: I feel a powerful connection with Theresa Cha, specifically, in that she licensed so much. Her use of French, typewriting, photography—those were her tools in trying to express something vast, complicated, and enduring. For me, she didn’t need to rationalize or defend them—they were integral to her query because they were the tools she availed herself of. I really appreciate that spaciousness, that ability to claim as needed, to present a novel logic and trust others to find something for themselves as they come along.

There are maybe more sophisticated ways to reference place and body and landscape, but the photos stood here for me instead. They vibrate in ways words simply don’t. I like that I am in them. I am here, my body fomented and transmitted… and this book is one mode of capture so I can share. I hope readers find something subtle, grand, human, and a little mysterious in here with me.

SUEYEUN JULIETTEE LEE grew up 3 miles from the CIA and currently lives in Denver, CO. She is the author of Aerial Concave Without Cloud, and That Gorgeous Feeling, Underground National, Solar Maximum, and No Comet, That Serpent In the Sky Means Noise. A former Pew Fellow in the Arts for Literature, she also makes video and installation art. Find her silentbroadcast.com.